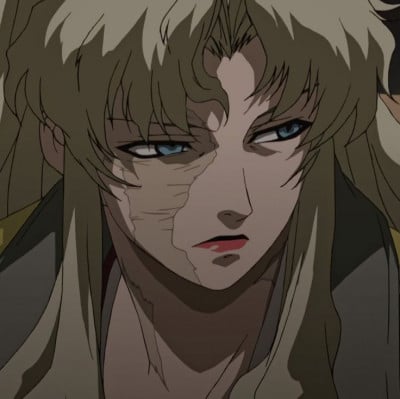 Balalaika is the boss of Hotel Moscow. Her real name is Sofiya Pavlovna, but that name is not used in her presence. She was brought up by her grandfather, a general in the Red Army of the USSR. Balalaika's father has presumably either been condemned by the USSR or fled the country as was the case for many of the military commanders of the USSR after its dissolution in December 1991. Balalaika is a tall, blonde haired blue-eyed woman with scars across her face, neck, breasts, and leg. Her hair is very long, going down to the base of her spine, and done up in a huge ponytail. She is usually seen wearing a wine red skirt suit with black stockings and black high heels. Her nails are long, and painted pink. She also wears rose-colored lipstick. She has a mole under her left eye. Whenever traveling, she wears a Russian military coat draped off her shoulders with a rank insignia of a Soviet/Russian Army Captain. However, she removes it when it is considered polite. Due to Balalaika's leadership during the hellish fighting in Afghanistan, her men look up to her as their superior and will do just about anything upon her orders. As a combat officer, she is a skilled strategist and well-rounded fighter, capable of taking care of herself despite the fact that all of her troopers, including Boris, often worry for her. Although she has shown herself to be rather cynical on occasion, she is also a pragmatic, opportunistic, and professional businesswoman. She is also downright ruthless, willing to go to whatever means to get what she wants. She frequently employs Dutch and The Lagoon Company, apparently because they share a mutual respect. Balalaika regards herself and her men as soldiers who missed their chance to die in Afghanistan. While some of her actions can be interpreted as attempts to pursue an honorable death in combat for her men, Balalaika's status as a military figure is tempered by her role in the criminal underground. She agreed to a pact with Mister Chang's Hong Kong Triad in 1993 and backed away from engaging Caxton's American soldiers in combat after Chang reminded her of their un-concluded fight. Presumably, Balalaika opted for a future battle with Chang over a present opportunity to engage the American unit, which she regards as a foil to her own disgraced Soviet unit. It's also possible that Balalaika simply decided to work with Chang to preserve their joint interest, keeping the city of Roanapur standing. Due to the fact that her force is entirely composed of ex-VDV, Spetnaz and Red Army Forces, they are at a serious advantage over the other criminal organizations as they have military grade training, combat experience and discipline that is unprecedented among the rest of the criminal underworld of Roanapur. This is clearly shown when they perform a series of complex raids to weaken the capabilities and coordination of the Yakuza. Balalaika is also one of the few people to earn the respect of Revy, who calls her "Sis". In turn, Balalaika also seems to hold Rock in high regard, sometimes relying on his knowledge and business skills as well as hiring him as a translator and even flirting with him. It is very unclear what her relationship with Rock is at this point.