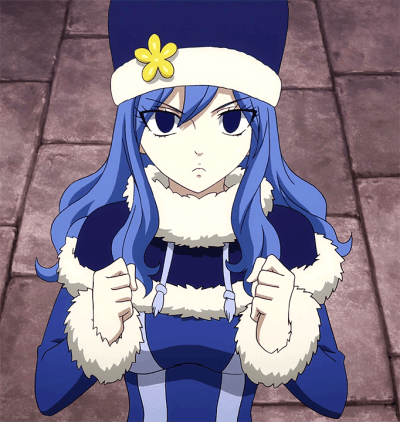 Juvia Lockser is a Mage of Fairy Tail and is a former S-Class Mage of the now-disbanded Phantom Lord guild where she was a member of its elite team, the Element 4, with her corresponding element being water. Juvia is a slender, teenage girl with azure blue hair, midnight blue eyes, snow skin complexion and a curvaceous figure. Juvia is first introduced with long hair, tightly curled at the base, wearing a sapphire blue coat, a cream colored furry trimmed navy blue shawl with a pure white teru teru bōzu attached to it, as well as a matching Russian Cossack hat. Upon becoming a member of Fairy Tail, she cut her long hair and began to wear more revealing clothing. However, after hearing about Gray Surge's crush on her Edolas counterpart, Juvia reverts to her original appearance, with the exception of the teru teru bōzu, instead wearing a Fairy Tail emblem. Juvia's Fairy Tail Guild Stamp is above her left thigh, being blue in color. Her Guild Stamp color later changed to white in X792. Around the time of the Grand Magic Games, Juvia starts wearing a knee-high dark dress coat which is adorned with four, symmetrically placed, light-colored buttons on the chest. The coat is garnished with fur trimmings around her sleeve cuffs and neck. Juvia wears a matching, dark, Russian-style hat, stylized with a light-colored butterfly clip, which, in itself, is attached to the fur trimming garnishing her hat. Juvia completes her outfit by fastening a light brown belt around her waist and wearing complimenting, dark brown, thigh-high boots. She also no longer curls her hair, instead letting it fall in thick waves past her shoulders. Juvia is first introduced portraying an emotionless face, seeming more secluded from everyone, including members of the Phantom Lord Guild. After she joins Fairy Tail, she develops a happier demeanor. She is obsessed with Gray Fullbuster to the point of considering anyone who shows affection towards him a rival. And when Meredy threatened him, Juvia loses her calm demeanor and entered a somewhat satanic-appearing state that frightens Meredy and even Erza. Juvia also seems to have a slight masochistic side; upon making a mistake, she asks Gray to spank her as punishment, saying it's her "hobby." She's also very polite towards other, typically addressing others with honorifics, though she addresses Gray as "Gray-sama" only. She cares deeply for Fairy Tail and its members. During the Battle of Fairy Tail arc, Juvia is pitted against Cana Alberona but instead chooses to sacrifice herself by attacking a thunder Lacrima, even though she knows that it will cause her harm. Upon entering Fairy Tail, she wasn't feared or hated for her past relationship with Phantom Lord, and she maintains a good relationship with the other members. She is also shy about her body, as she doesn't like to shower with other girls. Juvia tends to refer to herself in third person, and often says "drip, drip, drop" due to the rain she used to constantly bring everywhere with her. Juvia has a wild imagination in which she tends to fabricate relationships and love rivals. By X792, having spent a long time living with Gray, she also appears to have affectionately adopted or picked up Gray's habit of shedding clothes spontaneously.