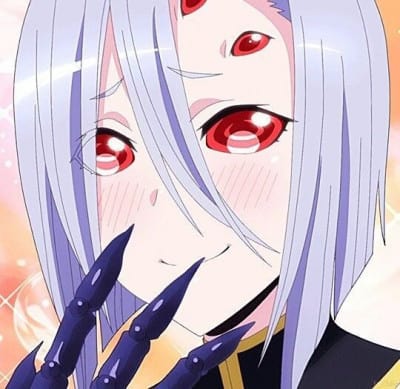 Rachnera Arachnera is an Arachne and the sixth girl to move in with Kimihito and fifth girl to officially do so. Due to their fear of her, her original host family had sold her off to Kasegi, who used her and her webbing to make money. This, along with his cruel behavior left her with a deep hatred for humans. This behaviour changed after she abducted Kurusu and found out that he was a decent person who didn't discriminate against non-humans. Since then, Rachnera has been flirting with Kurusu while facing her fellow monster girls in the house, especially Miia and Centorea Shianus who see her as their love rival for Kurusu. Rachnera has the body of a young woman with short lavender hair that covers the right side of her face. She has six pupil-less, monochromatic red eyes, and sharp and pointed teeth. Her most noticeable physical trait is the mass located at her humanoid buttocks which is that of a giant spider adorned with a large skull design on the back of its abdomen. She has black carapace covering her arms from the shoulders down, and long fingers with gauntlet-like plating on her hands that end in sharpened points. Her usual attire consists of a revealing halter top with shoulder-less sleeves, and black and gold loin cloth with a slightly-frilly white trim. Her outfits change more often than most of the other girls and are usually more revealing or mature. Most of Rachnera's personality seems to be determined by her bad experiences with humans. Because of this, she initially hated humans, and believed them all to be hypocrites. While she believed this by her outlook of Kimihito as well, she was shocked to find out his kindness was genuine. This changed her outlook significantly, though it did not completely change her. Nevertheless, Rachnera still retains at least some of her cynicism as evidenced by her conviction that Kimhito, as a man, would inevitably cheat on his home-stays. One of the biggest impacts that Rachnera's past has had on her is a deep-rooted hatred of dishonesty in any shape or form. No matter how ugly the truth is, Rachnera would still prefer it over pleasant lies. This is demonstrated when she managed to goad Cerea into admitting she hates her. Rachnera was actually happy with this, despite Cerea standing up for her to Miia earlier. Rachnera told Cerea that if she dislikes her then she should do so openly. One way to make her genuinely angry is to mock her history and motivations. Rachnera is extremely mischievous as evidenced when she gleefully traps her former host in her webbing after scolding her for not keeping her webs in one place . Likewise, she greatly enjoys provoking others, displaying an innate talent for saying the right thing at the right time to cause cracks in almost anyone's composure. In this respect, Miia and Centorea make very easy targets for her due to their mutual dislike for her and highly sensitive personalities. Rachnera also displays a pronounced sadistic streak given how she subjects Lilith to sexual torture and made members of her host family "subs" in her BDSM routines. . Notwithstanding her frightening appearance and unsettling "hobbies", Rachnera possesses a very sophisticated and seductive personality. Of all of Kimihito's tenants, she consistently displays the most confidence and self-awareness in her sex appeal when flirting with Kimihito (particularly when compared with Miia's suffocating displays of affection and Cerea's bashful prudishness). Likewise, Rachnera is the most licentious of the homestays as evidenced by her conscious attempts to sexually arouse Kimihito, along with her unabashed enjoyment of acts of (accidental) perversity on Kimihito's part . From what is shown, Rachnera greatly enjoys bondage, getting a great kick from tying her victims up in her own webbing, both sexually and non-sexually. However, dealing with both Papi and Suu in the others' absence proved to be too exhausting even for her. She is also revealed to be somewhat obsessive about perfecting her bondage technique, which annoys most of the other monster girls (except Suu, who cannot be bound, and Mero, who rather shamefully enjoys it) to varying degrees , though she seems to have exempted Kimihito from being webbed up in this fashion. However, she seems to include every monster girl who lives in Kimihito's home or is a possible rival as fair game, a fact that has Lala more than a little scared of her. She is implied to be somewhat lazy, and can frequently be seen slacking off. However, even despite her sinister traits, it is clear Rachnera's the most mature of all the home-stays, and can quickly discard her playful attitude and become very serious if the situation calls for it. Most notably, Papi and Suu consider Rachnera to be their favorite teacher in the household, even more than Kimihito himself, due to Rachnera being the most knowledgeable and skilled at teaching. Ironically, despite being built like a dangerous predator, Rachnera has great self-restraint, and Kimihito even noted that she's the only member of the household who has never genuinely harmed or endangered him, even by accident, which caused to her to become embarrassed. It is also shown that she cares deeply for Kimihito as when Lala said that Kimihito was going to die, she angrily bound her in thread and threatened her not to speak so offensively in front of her. Despite all this, according to Lilith, Rachnera's strong personality is merely a façade she puts up. Rachnera pretends to be uncaring, however she is afraid of being rejected again for her features, and that she is very self-conscious about her appearance. Rachnera's angry reaction implies that there is some truth to those words. In fact, when Rachnera gets intoxicated, she becomes much more emotional and honest about her true feelings.

No images found
Want to see more from the gallery? Register or Login
monster girl