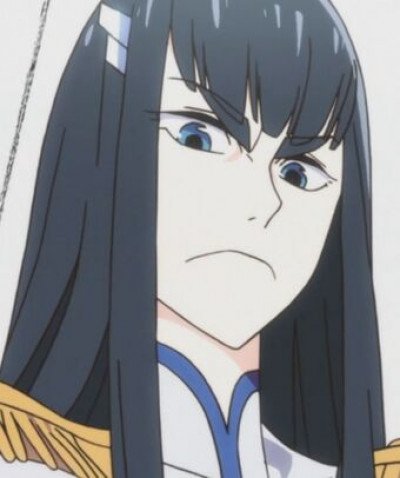 Satsuki Kiryūin is one of the main characters in Kill la Kill. She is the president of Honnōji Academy's Student Council and the ruler over the surrounding land. She has absolute authority over the academy and is regarded with reverence by many of its residents. She is also the eldest daughter of Sōichirō Kiryūin and Ragyō Kiryūin as well the elder sister of Ryūko Matoi. Although she was the main antagonist for the first half of the series with an anti-villain motive, she becomes a deuteragonist in episode 17 as her mother Ragyō Kiryūin takes the role of the antagonist for the remainder of the series. Satsuki is a tall slim woman with an angular face similar to her mother's. She has thigh-length dark-blue tinted hair that has inward diamond-shaped bangs hanging over her forehead, blue eyes, rather thick eyebrows and a rather large bust (although Mako Mankanshoku stated in her first head-to-head encounter with Ryūko Matoi that the latter had "bigger boobs"). She has the habit of perpetually frowning, although she does smile, albeit on rare occasions. Satsuki had long hair as a child, and while it was cut slightly shorter during her teen years, she grew it out later on. In Episode 25, she cuts her formerly long hair to page boy shoulder length style. Similar to her mother, Satsuki's presence is often accompanied by a glow of light that has been described by Uzu Sanageyama as "dazzling." Prideful to say the least, Satsuki is a extremely intelligent, calculating and patient young woman while simultaneously unwavering and iron-fisted. Unlike with Ryūko and Senketsu, she had no shame in wearing the Kamui Junketsu in its most revealing form; she claims that her actions in donning Junketsu are, like the Kamui's name implies, "utterly pure". Satsuki refers to people as "pigs in human clothing", and justifies that the weak and foolish must be ruled. Due to her steadfast convictions, she also possesses a natural charisma and ability to lead others. In spite of her pride, Satsuki is shown to be pragmatic and determined, willing to cast aside pride and using whatever means necessary in order to secure victory, even if it threatens her life. When fighting Ragyō Kiryūin, Satsuki noted that her willingness to fight her mother and the Life Fibers was due to revenge, noting that great causes are born from personal desires. In spite of her behavior at school, Satsuki is not heartless. While very harsh and not very willing to tolerate failures, she does care a great deal for the Elite Four; and is as protective of them (in her own hidden ways) as they are to her. As a child, she would always drink Mitsuzō Soroi's tea, in order to protect his feelings; despite disliking its bitterness for a long time, she eventually found it delicious. When she reminisces about this to Soroi, Satsuki, herself, notes that she must have been a kind-hearted girl if she'd gone that far to protect her butler's feelings. Satsuki genuinely loved her father and her sister, enough to avenge them by attacking the mother who disposed of them. Likewise, despite a bitter, almost hatred-fueled rivalry with Ryūko for most of the series, Satsuki noticeably softens up to her when she learns that Ryūko is the sister she'd long believed to be dead. Following the final battle with Ragyō, Satsuki accompanied her younger sister on her date with Mako Mankanshoku and it is shown that she has a hidden side to her personality that, up to that point, was previously unrevealed: She can be somewhat bashful and coy, as shown in the pictures that were taken during the date.