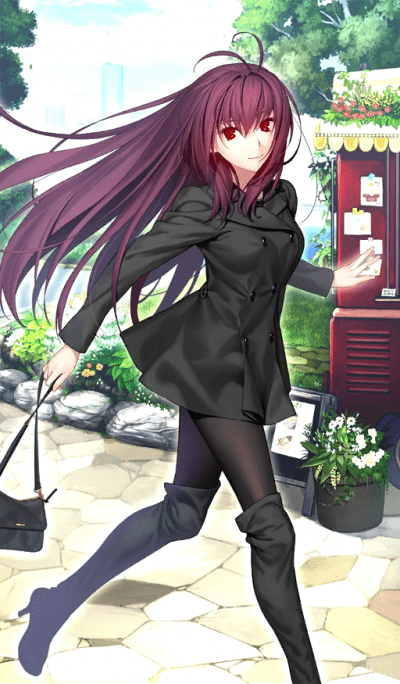 Scáthach, Class Name Lancer, is a Lancer-class Servant summoned by Ritsuka Fujimaru in the Grand Orders of Fate/Grand Order. Scáthach is an extremely beautiful woman. She has long purple hair and red eyes, and wears a full-body outfit that highlights her curvaceous body, with metallic shoulder pads. In her first Ascension, Scáthach is seen wearing a mask on the lower half of her face, and seemingly protective gear underneath the body suit, evidently by the fact that in her future Ascensions, where the mask is removed, the tone of the suit lightens as well. She is seen carrying Gáe Bolg Alternative. In her second Ascension, the mask and protective gear are removed, revealing her face. In her third Ascension, she is seen carrying a second Gáe Bolg Alternative and wears a black veil over her head and short cloak over her shoulders, connected by the shoulder pads. A beautiful young woman who possesses a light disposition, a queen and a teacher proven to be reliable, and for some reason or another, has the flavor of an elder sister that lives at the house next door. She can still go on. Proud and not serving anyone. A member of the ruling class from birth. Possessing the traits of a monarch, Scáthach holds the ideal of reigning as a queen that bestows happiness to the people as self-evident. Overflowing with talent, she herself understands more than anyone else that she is different from the mediocre. "Because I am superior, I will rule over the masses." "Ruling the masses is the duty of the ruling classes." That being the case, rather than granting her own desires (happiness), "to rule for the sake of the masses" or some such appears to be the natural thing to do, something of which can be said to be her thought on this matter. Although her mind has no intention on becoming a slave for the masses, she has absolutely no hesitation in refining herself for the sake of the people under her rule and their happiness. In the same way how she has an understanding about herself, Scáthach is also endowed with a reliable eye to see through the character and traits of others (in particular, whether they are mediocre or not). In other words, one can say that Cú Chulainn was a rare individual who possessed prodigious qualities that made him worthy of being guided by her. A wise woman who grasps every incident and all origins, but does not speak of these understandings. To say why she doesn't talk about these, concerning her, she already moved on from this World. For example, even if the World falls into a crisis, it would be a discourtesy to "those who presently live in the World" to personally resolve the problem and have herself stand out since it will result in those people's opportunity for growth to be taken away. So basically, Scáthach does not cooperate or participate in direct battle and refrains from giving advice... Although, it can be said that, given that she has a genuine fondness for battle, she deceives herself by attaching a reason one way or another and participates in local battles, demonstrating some of her special moves. After taking away the turns of the other Servants like that, she returns to her room alone to reflect on her actions with regret. Cú Chulainn says that "her warlust would be enough to make that Tohsaka girl run away on her bare feet." It has been said that her way of being and red-colored eyes are close to a certain individual that existed in Tokyo during the 20th Century. Scáthach likes courageous people, and not just ordinary warriors; nor just foolhardy brutes, but a brave warrior full of potential. That is what she favors. Naturally then, she dislikes people without courage. Concerning the Master, Scáthach recognizes their partnership as a temporary alliance. Sometimes, her habit comes out where she openly conducts herself as a teacher around the time when she was teaching lessons to her former child pupils. She would notice that and then say, "... no, I am not your teacher. Forget it." She would affirm this by saying that she is neither their teacher, mother, sister or lover. The wish she would make on the Holy Grail is for "someone who can kill me to appear." Scáthach, having turned halfway into a Divine Spirit at the end of a long time, became an immortal existence. She can no longer die as a person. Neither a beautiful death. Nor even a hideous death. She must simply continue to exist, until the time when the World - and its outside - finally disappear. If something like the Holy Grail is truly almighty, then it is fine to hand it over to someone who is capable of killing her. Also, if possible, let that someone be the possessor of the spear she once bestowed with her own hand——— Unable to die a normal death, Scáthach greatly wished that Cú Chulainn would have been the one to kill her.