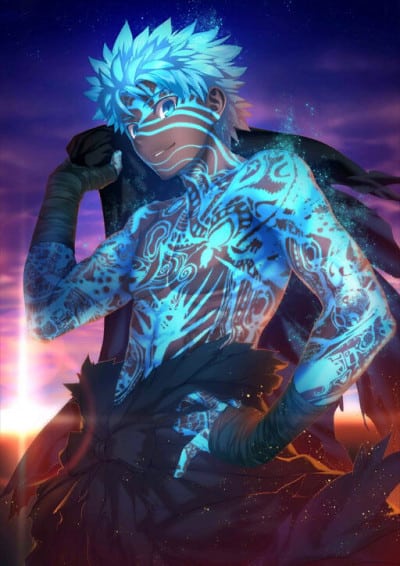 Aŋra Mainiiu (Angra Mainyu), Class Name Avenger, is the Avenger-class Servant of the Einzbern Master‎‎ in the Third Holy Grail War. He is an abnormal Servant that is not part of the regular seven classes. While he was not actually the evil god of Zoroastrianism, his defeat in the Third War corrupted the Grail, turning it into the equivalent of All the World's Evil. He acts as the Servant of Bazett Fraga McRemitz in place of Lancer in the four day loop of Fate/hollow ataraxia. He is one of the Servants summoned by Ritsuka Fujimaru in the Grand Orders of Fate/Grand Order. Avenger does not have a "true" appearance since he is nothingness itself. In his original state, he possesses no personality and no appearance. It is only by possessing others as his shell that he is able to acquire an appearance and a personality based on his host. As he begins to return to his original state of nothingness, he begins to lose his physical features and look like a shadow. In Fate/Zero, he used the form of Irisviel von Einzbern to communicate with Kiritsugu Emiya. His scorching mud had dyed her elegant skirt black. In Fate/hollow ataraxia, Avenger takes on the form of Shirou Emiya. As Avenger, his overall appearance is based on Shirou but with darker skin, black hair, and glyphs tattooed all over his body. His clothing consists of a tattered red waist cloth, a bandana of same color, and black bandages on his forearms and shins. Furthermore, Caren and Bazett use oil paints to paint Shirou as Avenger in the Bonus epilogue, they both claim that they look identical. According to character toys and Chibichuki, he wears a red fundoshi under his waist cloth. Originally he was a good-natured young man before he was randomly chosen to be the "source" of his village's evil and tortured until death. His hatred for the world became his very nature but he forgave humanity and accepted it, both good and evil. As nothingness, he no longer has any personality unless he possesses a host body. In hollow ataraxia, Avenger usually has a lazy and laid-back attitude, lacking any sense of justice. This is best shown when he decides to kill innocent people in order to attract the attention of a Master and their Servant (since he believed it was the easiest way). He is also known to be sarcastic, cynical and mercilessly mocking towards the people he interacts with.