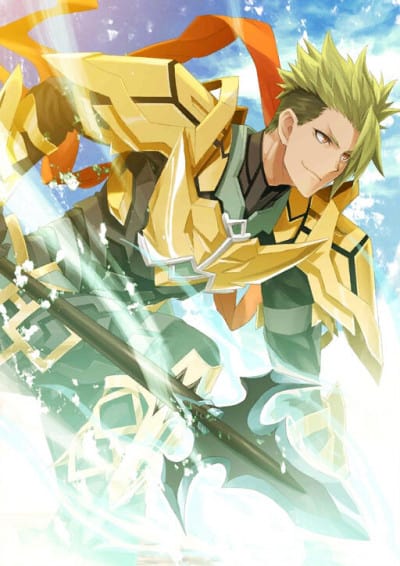 Achilles, also known as Rider of "Red", is the Rider-class Servant of Cabik Pentel of the Red Faction in the Great Holy Grail War of Fate/Apocrypha. Shirou Kotomine assumes command over him before he even meets his Master, and through his machinations he later officially becomes Rider's Master. He is one of the Servants summoned by Ritsuka Fujimaru in the Grand Orders of Fate/Grand Order. Rider appears to be a great hero just from his appearance, one who would be admired by any man or woman, young or old. While his face is pleasing to the eyes, it is not like the knights of old whose courteousness softened the hearts of noble ladies. He has the eyes of a raptor, a strong and firm build, and the lack of any appearance of crudeness. Rider has spiky green hair that stands up except for a single bang that hangs over the left side of his face. The chest piece of his silver armor also features a bird. An orange cloth is wrapped loosely around his body. Rider is described as being broad-minded and audacious, often displaying a carefree smile on his face. He is not a hero like Spartacus who rebelled against all authority, but he is far removed from knights who valiantly served kings. Even if ordered by his Master, he is a Servant who will not accept tasks he does not wish to complete, showing his nature as a "hero." He thinks little of those called kings, so he has "fatal lack of compatibility" with those like Semiramis; the only exception would be the Amazon Queen Penthesilea, as he had an awful amount of regret when he killed her with his spear thus making it hesitant for him to fight against female opponents. During the course of a regular war, the first clash would likely have been between the two of them. In such a way, he once openly ignored orders from a king he disliked, only taking up arms for the sake of a slain comrade. While he is able to stand stern against those he has marked as enemies, he becomes soft when faced with those whom he has already marked as "good people" when they temporarily remove themselves from being his ally. He has striven to live his life in such a way that he is constantly the target of killing intent and hateful animosity, and he has become accustomed to it. He was one who stood out alongside other heroes, displaying confidence in any battle and a great will to fight. His thirst for blood is such that normal humans will have their spirits utterly crumble before him. He freely boasts before his opponents and mocks them severely, even while outnumbered and not fighting at full power. He was one whose one true friend and the women who loved him meant all the world, so such things are nothing to him. For the opponents of the war whose scornful glares are directed at him, the only difference compared to those who directed animosity towards him in his life are the time in which they existed and the weapons they wielded. He views them as all the same, and plans to cut them down like they are nothing. He has a very close relationship with Atalanta and calls her as "Sister", . Due to him and Archer being from the same lands, Assassin believes that he will no doubt make advances on her. While his charm and demeanor are enough to fluster even a "virtuous wife" with his words, though they are not effective due to her time in the wild. When they work together for the first time, William Shakespeare suggested to write a love poem for them, Rider's eyes sparkled with joy at Caster's suggestion and happily accepted it. Rider seemed to be obsessed with facing Chiron as he was a similar existence as him and was capable of harming him. When he learns Archer is Chiron, it was only natural that Achilles had wavered for an instant. Chiron had been an absolute figure and symbol to his younger self. His gentleness, seriousness and words had been engraved like magic into the young Achilles. Chiron was a father, teacher, older brother and close friend whom he spent his childhood with, when he was at his most sensitive. For Achilles, who was the son of a hero, had received the blessings of the Olympian gods and had been given looks of awe, respect and admiration from many young warriors, there were few people he could truly call his friends or teachers. Chiron was, beyond a doubt, one of those few people. He was someone Achilles could trust just as much as his close friend Patroclus. Rider still respectfully calls him master (先生, sensei?). There was definitely a bond between them. Teacher and student, friend and friend who trusted each other from the bottom of their hearts. Even if they trampled on those feelings, vast 'joy' over facing each other that surpassed their other feelings definitely existed in their hearts. He wishes to fulfill the vow he made with his mother, "live like a hero and die like a hero" and to fight against Chiron. Despite this, however, the three people that Achilles never wants to have a rematch with, regardless whether it is before or after his death, are Hector, Penthesilea and Chiron.