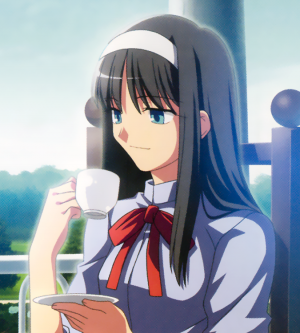 Akiha Tohno is the younger sister of Shiki and the head of the prestigious Tohno family and a student of the elite Asagami Private Girls Academy. Akiha has long black hair (that turns red in her Crimson Red Vermillion form) decorated with a white hairband. During school, she wears the standard Asagami uniform, even when she later transfers to Shiki's school. Her casual clothes consist of a white shirt with a red ribbon on the necktie and a long red skirt with knee-high brown lace-up boots underneath (which oddly are replaced with socks and slip-on formal shoes in her Melty Blood sprites). Akiha is very protective of her brother. She is always intent on knowing what he does with his day, and is extremely suspicious of what he does at night. She gets incredibly jealous when he is around other girls. The constant supervision by his little sister sometimes bears hard on Shiki, but she only watches over him because she worries so much about him. Despite her general peevishness, she really is a sweet girl at heart. She plays the violin in her spare time. Her father remarked in his journal that Akiha's Tohno blood was of the weaker sort and she could live as a normal human if she wished it. But that changed when Shiki's life was threatened in the "accident" from eight years earlier. She was outside playing with Shiki, her adopted brother, and her real brother, also named SHIKI. But the Tohno blood was much stronger in her real brother and he inverted to his non-human form. In this uncontrollable state, he lost control of himself and attempted to attack Akiha. Shiki jumped in the way to protect her and took the full force of the attack. Shiki died protecting Akiha, but Akiha used powers granted to her by her non-human blood to give him half of her life, allowing him to survive. After the incident, her true brother SHIKI was locked away so that he could never again hurt someone and Akiha severed all ties with him and has since said that Shiki, her adopted brother, is the only person she will ever call her brother. Due to this accident, she needs twice the amount of heat of an average person because she is supporting both her own life and Shiki's. To make up for her increased demand, she must absorb heat from others. She can take this heat in through various means, even by simply absorbing their body heat through contact, but the most efficient method is by drinking fresh blood (as seen when she sucks Kohaku's blood in a scene from the game). Because of the strain on her body, this causes, she often experiences attacks of intense pain that can last from a few minutes to several hours. But Akiha bears them bravely, knowing that it is all for the sake of her beloved brother. Akiha is also a rather judgemental person, having a tendency to hate people very quickly before she's ever really gotten a chance to know them; she instantly takes a disliking to both Arcueid and Ciel, Ciel due to being a member of an organization who opposes non-humans like herself and Arcueid because of how whimsical she is and how close she is to Shiki. She is also very self-conscious about her flat chest and it later causes lots of running gags in later sequels like Kagetsu Tohya. Though she tries to conceal it, Akiha called her brother back because she truly loves him and wanted to be near him no matter how much it might alienate her from the rest of the family. She is incredibly shy about her feelings, even acting in complete contradiction to them on occasion. In spite of this, to her, Shiki is the most important person in the world.