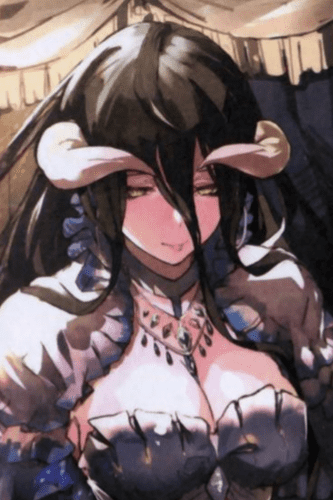 Albedo is the Overseer of the Guardians of the Great Tomb of Nazarick. She is in charge of the general management and supervises the activities of the seven Floor Guardians, meaning that she ranks above the other NPCs in Nazarick. She is the middle sister of the older sister Nigredo and younger sister Rubedo. Along with her sisters, she was created by Tabula Smaragdina. An impeccable beauty, Albedo is a woman with lustrous jet-black hair and the face of a goddess. She has golden irises and vertically split pupils; on her left and right temples are two thick horns protruding crookedly, and on her waist are a pair of black angel wings. Albedo wears a pure white dress with silky gloves covering her slender hands and a golden spiderweb necklace that covers her shoulders and chest. In combat, she wears an impressive black full plate armour with a unique helm and carries a battle-axe with her. Extremely loyal and in love, Albedo is infatuated and needy/clingy with Ainz, often showing obsessive tendencies when it comes to his affairs. She is always vying for Ainz's affections, showcasing outbursts of jealousy whenever anyone else appears to be getting close to him. Yet despite this, she states that as the Supreme Ruler, it would be bizarre for him to only take one wife, implying that she would be content with him taking others as wives as long as she is the one he loves the most. Due to her nature as a succubus and how she was programmed by Ainz to be in love with him, Albedo is quite assertive to a fault. She sometimes loses control of herself around what Ainz says to the point of going to extreme actions, such as almost raping him against his will. Among all the Guardians, she is the most vocal when it comes to expressing her opinions. Albedo will openly denounce any statement or action she deems inappropriate, reaching the point where Ainz sometimes considers it an annoyance. As the Overseer of the Floor Guardians, she is very levelheaded. Albedo can make calm and collected judgments that even Ainz sometimes doesn't think of. She takes Ainz's orders as a top priority and absolute, punishing anyone, even a Floor Guardian, who'd dare to belittle or not take it seriously. According to Ainz, he can sense that Albedo harbors hatred and hostility toward humans, whom she calls an inferior species. Albedo can easily lose self-restraint and go mad if Ainz is harmed, even by an attack that may not hurt him whatsoever. She becomes very emotional whenever Ainz is put under mortal danger, such as a life-or-death situation, or if he considers abandoning her.