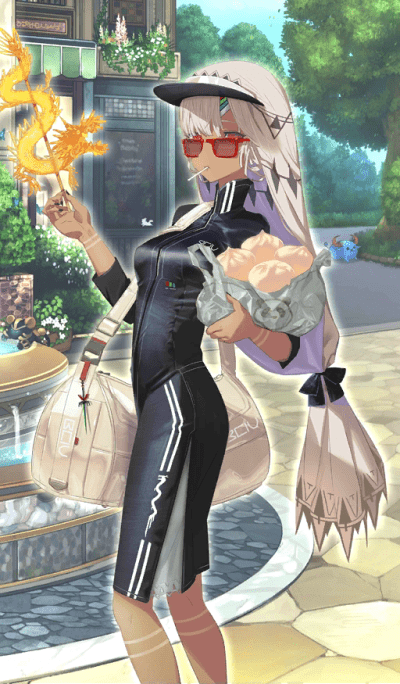 Altera, Class Name Saber, is a Saber-class Servant summoned by Ritsuka Fujimaru in the Grand Orders of Fate/Grand Order. Altera is a beautiful tan-skinned girl with red eyes and white, veil-like hair under her actual white veil. Her body is carved with the white marks of war and tattoos of combat as the Crest of the Star. In truth, Altera dislikes her more common name of “Attila”. She does not dislike its meaning – ‘father’ or ‘controller’ – but rather its sound, and is somewhat more attached to the German “Etzel”. She calls herself “Altera” and wishes to be known as such, but it is difficult to have her explain the reason. Only to the very small number of people she trusts will she quietly disclose the truth – because "Attila" does not sound charming or sweet. With her excellent instincts, Altera can deal with even the most drastic of circumstances without abandoning her reason – a proud and logical fighter. However, there is a sort of ’emptiness’ about her. Although she lacked emotions while she was alive, Altera gained the ability to feel when she was summoned as a Servant. However, she feels uncomfortable with emotions because she doesn't know how to express them. Regardless of friend or foe, Altera has some magnanimity for those warriors whose skill (performance) she has acknowledged, but those who stand against her are treated as only obstructions to be removed, and she is fundamentally merciless. There is no hesitation in her blade. In battle, she can coolly and correctly grasp the situation, becoming a merciless killing machine. She has an innate compulsion to destroy, of which she describes it as being even greater than that of a Command Spell's. In truth, this is because she is the Cerebral Corpus of Velber 02; her connection to the White Titan has been disrupted due to the destruction of Velber 02's Earth-based body, but lingering memories of her former existence remain in her mind even if she cannot make sense of them. Although she recognizes combat as where she is truly in her element, Altera personally does not like it. She fights because she is a fighter. In the name of the violent and unchained God of War, she kills all who stands in her way and destroys all ‘civilization’ before her, nothing more; that being said, she has since gained a slight amount of nuance and only actively destroys what she deems "bad civilization". She is unused and inexperienced in matters outside of war and combat. Altera was born with a fondness for the God of War, Mars (Ares). She would call him “Marc”, though she did not enforce this on others. It was just something she preferred. Altera treats her Master stoically, recognizing them as a general or adviser-like figure, and will generally go along with anything they say with an “I see.” Instead of trusting as a human being, the situation is closer to a fighting machine on the battlefield that fully relies on an external software (the Master) to process thoughts. Having become a Heroic Spirit and taken form as a Servant, Altera began silently questioning herself. Had she perhaps been too much of a warrior? What if she had not become the embodiment of destruction itself? What if she never gripped the Sword of the War God? She had been feared by Europe as the punishment brought down by their absolute deity, the very Whip of God Himself. She had been a fighting machine. What life could she have lived, if not as a warrior? What would she have spent her time on? Would she have been a traveler, freely circling the world on the back of her horse? Would she have been a grower of life, tilling the earth as she had seen the people of Europe done? Would she be baking bread in a smoldering oven? Hunting birds and beasts in the wild? Would she be learning words and language, and writing it down in books? Would she, with reddened cheeks and a gentle smile, have pressed herself into the breast of another? She did not know. But she wondered… Altera wants to destroy the Holy Grail, but if she were to have a wish for it, her wish would be "I want to try living a life other than that of a warrior." She does not despise the life that she spent fighting, but she is interested to find out how she would have lived otherwise. "Just, if I were not a warrior, what sort of life would I lead." She holds such a curiosity.