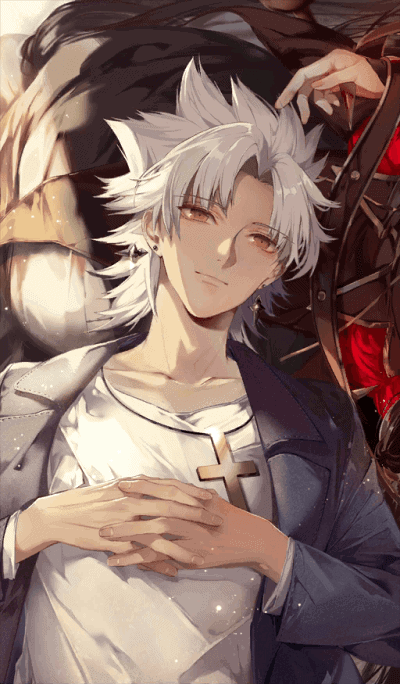 Amakusa Shirou Tokisada, Class Name Ruler is the Ruler-class Servant of the Einzbern Master‎‎ in the Third Holy Grail War in the world of Fate/Apocrypha. Taking on the name Shirou Kotomine, he is the Master of Assassin of Red in the Great Holy Grail War and overseer of the War. He later contracts with Caster of Red, Archer of Red, Lancer of Red, Rider of Red, and Caster of Black. He is one of the Servants summoned by Ritsuka Fujimaru in the Grand Orders of Fate/Grand Order. Shirou appears to be a tanned-skinned youth with white hair like silver and with dark ageless golden eyes. His hair became white as compensation for when he forcefully incarnated and after that his skin changed color because he spent twenty years in the middle-east. He wears the vestments of a priest and a golden cross around his neck. His vestment is a type of a red holy shroud and he wore a red stole over his cassock. He has an innocent, boyish face showing that he has yet to have aged past twenty years of age. Though incarnated decades ago, Left Hand - Xanadu Matrix has granted him his still youthful appearance. He is eternally seventeen years old despite he is over seventy years old. He hasn’t emotionally matured regardless of how much knowledge and experience he has gained. His body is covered in scars and he has two Command Spells on his chest, the seals are very similar to Kirei Kotomine. In his Servant form, he has long hair tied into a ponytail. His clothing is a mixture of traditional samurai outfit with European influence. He wears a jinbaori style haori with Christianity crosses decorated on them. He wears a tradition umanori hakama with Shin guards which had cloth straps that were used to tie the Shin guards to the lower leg. He wears a collar shirt underneath his Kimono and a Cravat tied around his collar. In his lifetime, Shirou walked the path of suffering and despair. He and his comrades fought for their faith and beliefs, and in return, they failed and died. He once hated everything, from God to humans. He claims that he hated humans, not because they had killed him or his comrades, but how humanity easily accepted it as a repeating system in history where life is priceless yet has no value. He finds humanity to be just like Ouroboros, eating themselves in order to grow. Shirou admitted to his failure, his mortality and his guilt. So, he forsook his heart filled with hatred, for the sake of humankind's salvation. He claims he does not hate humanity anymore, and that he will save the current six billion people and the people from past and future. In reality he is trying to save humanity to forgive himself for not being able to save a single person, he wishes for everyone to throw away their selfishness and create a world where everyone is saved and happy. He desires to make use of the Holy Grail to fulfill his own ambition. He simply wished the happiness of all mankind, for innate goodness to be found in the heart of all humanity and the annihilation of Angra Mainyu: All the Evils of the World. Shirou appears to be a benign man with an innocent smile; he is in actuality a manipulator who would destroy his adversary with no hesitation in order to fulfill his own ambition. He is essentially a character who looks light on the outside and has a darker personality inside. Kairi sees him as being overly judicious given his supposed age. He is the mastermind, but is a good and virtuous being. In the first place, it is a matter of argument whether or not Shirou’s actions are truly evil. Because you could say that he guided people through a slight shortcut to the place they would eventually reach someday. However, on the other hand, he is unmistakably evil. Because he tried to save not individual people, but only the human race itself. Having no hobbies or anything he likes, he's lived for seventy years for the sake of humanity’s salvation. Even if his plans were overturned in the end, the instant when he saw the rising sun as he lay on Semiramis’ lap—was a moment of supreme bliss for Shirou.