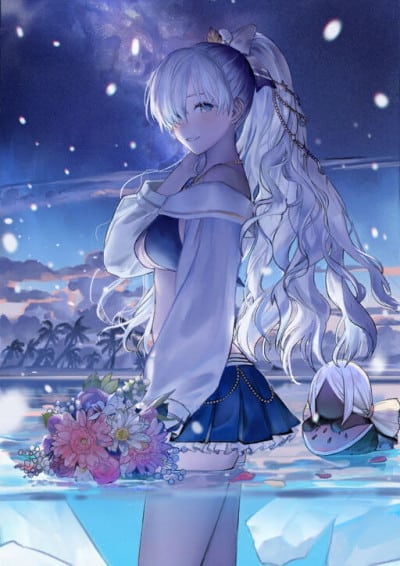 Anastasia Nikolaevna Romanova and Viy, Class Name Caster, is the Caster-class Servant of Kadoc Zemlupus in the Grand Orders of Fate/Grand Order. She is later summoned by Ritsuka Fujimaru. Anastasia is a beautiful girl, having long white hair and a fringe covering her icy blue eyes. She wears an ornate white gown and a white fur cape with gold designs and blue lining on. She is seen caressing a doll. Anastasia is shown to have a bitter, cold disposition. She seems to call Ritsuka Fujimaru, Mash Kyrielight, and Leonardo da Vinci or perhaps those who oppose them as Rats, "Powerless living things that could do nothing but gnaw and multiply". Her belief of the world is that it is "cruelly, terribly cold", and that those who consider the mild surroundings as 'cold', should be shown a true hell. Though she has shown to have some sense of small sympathy, as she warned Goldorf Musik that he was being backstabbed and used by the enemies. However, she only follows orders as is. As the servant of Kadoc, she is shown to be slightly nicer underneath. She only acts distant due to her past and does not want her loved ones get hurt again, but once someone gets to know her, she is friendly, mischievous, and loves to play pranks. As the servant of Ritsuka, she initially displays cold and distant behavior as a defense mechanism due to her being betrayed in the past, as her bond levels go up, she is nicer and shows a kind and playful side to her such as taking selfies or playing pranks. She is also shows close relationship with Marie Antoinette during the Enmatei event. She does not like the color red. Although the Chaldean Anastasia and the Anastasia that was Kadoc's Servant are two different beings, the former still feels herself to be personally responsible for the attack on Chaldea, with her guilt growing to the extent that she nearly committed suicide by draining her own magical energy in the misguided belief that she did not deserve Ritsuka's kindness. Following Ritsuka's intervention to save her, the Chaldean Anastasia still hates her other self for what she did to Ritsuka and their friends; however, she also acknowledges that she had her reasons for doing what she did and has accepted that she does not need to atone for her other self's crimes.