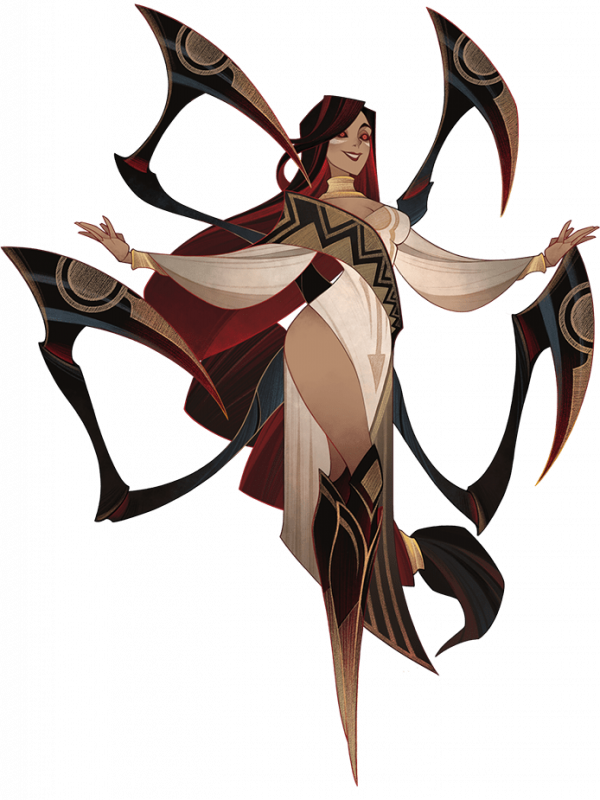 When most people think of the Maulers, they imagine hulking beasts, bloodied fangs, curving claws, and stampeding hooves. Brute force and ferocious attacks are hallmarks of Mauler military might, but they aren't the only methods of violence in the Mauler playbook. There are others among their ranks which are more patient, more passive, and just as deadly. There are those who dwell in the darker corners of the Mauler lands, laying in wait for prey, tending their nests. A traveler unwise enough to find himself in these places would not be in danger of being chased down by some centaur with a brutish weapon, nor would he be torn to shreds by a lion-headed monster. Rather, when he took a wrong step, he would find himself helplessly entangled in a surprisingly strong web. After a single sharp pain, the victim would begin to convulse as his organs began an agonizing dissolution. The Arachin maintain a matriarchal society. Within their clan, the queen reigns supreme. Her word is law, her will is the will of all those inhabiting the nests. Through twisting caverns and dark places laden with old webbing, her purview is paramount. Ankhira is the recently ascended queen of the Arachin. She is one of the new generation, but already her pointed limbs exhibit the brightest hues, indicating the extreme potency of her venom. She is one of the deadliest beings to exist, and even the most battle-hardened veterans of the Maulers treat her with a wary deference. A single strike from one of her piercing arms will immediately put the largest foe on the ground, writhing in unimaginable pain. Within a handful of seconds, the screaming will become a choked gurgle. A handful more and there will be nothing but silence and a visibly deteriorated corpse as evidence that anything had occurred at all. When the Hypogeans broke back into the world, the Arachin nests were not spared their attention. After the first incursions, the Arachin began constructing defensive arrangements under Ankhira's oversight. Old webs were taken down and rewoven, often being laced with the deadliest toxins. The webs which had once served to capture were repurposed to kill. Nourishment took second place to survival, and survive they did. Later expeditions from Hypogean death squads met quick deaths in the tunnels they had once felt relatively at home in. Again and again, detachments would march into yawning caverns and simply disappear with no evidence of their passing save for discarded weapons and armor littered about the cave floor and the occasional helm suspended from a strand of webbing. The Hypogean hordes have made the decision to shift their focus away from the Arachin. The resources lost in the that particular pursuit were too many, and there are other fights to be fought. The retreat of the demons from the nests have only served to reinforce Ankhira's dreaded reputation. “One moment. One drop. One death.”