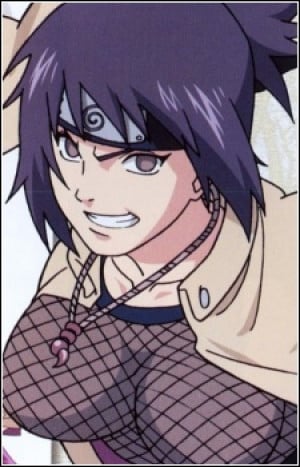 Anko Mitarashi is the proctor for the second exam of the Chuunin Selection Exams and leader of the Infiltration and Reconnaissance Party. Anko was once the student of Orochimaru. Later she, along with nine others, were branded with Orochimaru's first ten samples of the Cursed Seal of Heaven. Of the ten, Anko was the only one to survive, establishing the one-in-ten chance of surviving the Cursed Seal. Orochimaru supposedly rejected Anko as a subordinate, believing she did not have the lust for power or vengeance needed to fuel the Cursed Seal. Orochimaru lost interest in her, though he believed there was some value in letting her live. In the anime, after learning of her past, she was glad to discover that she wasn't tossed away like trash as she first had thought by Orochimaru, but chose to leave Orochimaru herself. Anko is easygoing, tomboyish, playful, stubborn, and sometimes hyperactive, making her very similar to Naruto Uzumaki in many ways. Despite portraying several "Naruto-like" habits, she has shown to be very knowledgeable and studious. However, she is also shown to have a bloodthirsty (in a literal sense) side, as shown when she scratched Naruto's face with a kunai, and licked away his blood. This probably comes from her time with Orochimaru. She regularly makes sure to have at least basic knowledge of the landscape for which her next mission will take place. As shown in flashbacks during the Land of Sea arc, Anko greatly admired Orochimaru while under his tutelage, seeing him as a role model and was inspired to be more like him. After being branded by Orochimaru with the Curse Seal, Anko became enraged and carried a deep loathing for her former teacher. From there on, Anko continues to search for Orochimaru in hopes of taking him down, feeling that it is her duty as his former subordinate to stop him, even at the cost of her life.