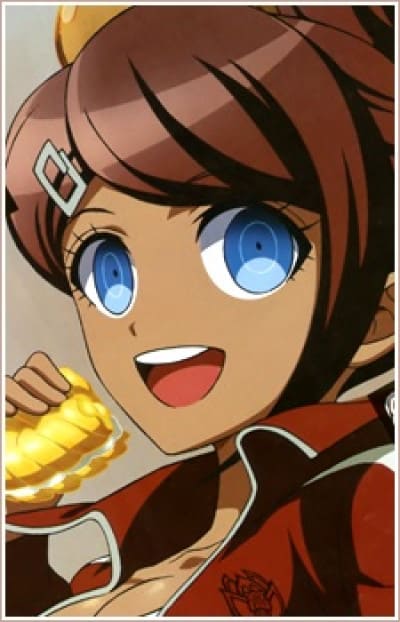 Aoi Asahina, also known as Hina, is a student in Hope's Peak Academy's Class 78th, and a participant of the Killing School Life featured in Danganronpa: Trigger Happy Havoc. Her title is the Ultimate Swimming Pro. At the beginning of the Killing School Life in Danganronpa: Trigger Happy Havoc, Aoi appears to be young high school-aged teenager, but due to the memory loss she is two years older than she believed, closer to her late teens or early 20s. Aoi is 5'3" (160cm in the Japanese version) and around 50kg with a lean but curvaceous build. She has brown skin, blue eyes, and wears her brown hair in a very high curled ponytail accessorized with a paperclip-style barette. She wears Hope's Peak Academy-branded blue dolphin hotpants and green sneakers, a white tank top, and a red tracksuit jacket with white piping and her previous high school's logo on the chest. She wears knee-length white socks, a red knee brace over her right knee, a band-aid on her left knee. While swimming, she wears a typical high school girl blue swimsuit with her last name in kanji on the front. After leaving Hope's Peak Academy and joining the Future Foundation, Aoi wears a modified version of the Foundation's standard female business suit uniform, wearing a green tie and shorts instead of a skirt. Under her suit jacket and dress shirt, she wears a white tank top. She still wears her hair in a ponytail, but it is considerably longer indicating her hair has grown over the years. Aoi is a warm, cheerful, upbeat, and outgoing girl who is friendly and welcoming towards everyone she meets, trying to make friends with everybody and include them in her activities. Aoi can be quite air-headed and forgetful, relying on the memory trick of writing peoples' names three times on her hand in order to remember them - a trick she also taught to her brother, Yuta. Due to being quite air-headed she can be easily manipulated by others and jump to conclusions or take them at face value, often being one of the few to fall for killers' tricks and misdirection during Class Trials. Aoi is an extremely athletic person and considers it an absolutely fundamental part of herself, using it as an important coping mechanism in her daily life and feeling like she "might die" if she can't exercise. Although Aoi is a star athlete in the running to become an Olympic swimmer, Aoi is insecure that being athletic, which is seen as quite a masculine activity, makes her undesirable to others and might lead to her never finding love. She's also concerned that her extreme sweet tooth, particularly her love of eating donuts, is going to make her fat. Her positive attitude is truly challenged by the events of the Killing Game, and it fundamentally changes her outlook on the world and her relationships. She is extremely loyal to her friends to such a degree that when they are harmed it shatters her ability to emotionally cope. She very nearly falls into despair during the events of the Killing School Life, as the emotional snowball of the continuous deaths compounded her sadness exponentially, crying alone in her room in the evenings and frequently comfort eating. This came to a breaking point after the death of Sakura Ogami, where she felt so hopeless that she was willing to get herself and the other survivors killed to avenge the death of her closest friend who had been shunned by the rest of the group. It took the support of her other classmates and learning that Sakura had sacrificed herself to try and save the others for path to recovery to begin. Aoi very quickly gravitated towards Sakura as a fellow athlete, and the two formed a very strong bond, spending the majority of their free time together and becoming very protective towards each other. She also became extremely close to Makoto Naegi, whose ability as the Ultimate Hope was vital in her path to recovery both during the Killing School Life and when she was emotionally tested once more by being thrown into the Final Killing Game. Aoi was very effected by Makoto's strong and unwavering belief in the power of hope and friendship, and in her darkest moments during both the Killing School Life and Final Killing Game he was able to bring her back from the brink and believe that the future was worth living for to honor the memory of the friends they lost along the way.