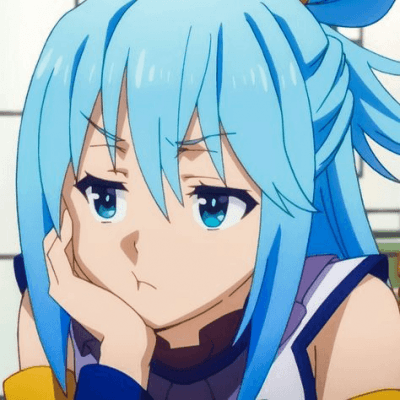 Aqua is one of the three main deuteragonists in the KonoSuba series. Prior to life in the Fantasy World, she was a goddess of water who guided humans to the afterlife; within, she is worshipped by the Axis Order. Described by Kazuma as being a beauty no human could match, Aqua has light blue hair and eyes, a slim figure with ample breasts, long legs, wide hips and blue waist-long hair that is partially tied into a loop with a water-molecule shaped clip. Her B-W-H measurements are 83-56-83 cm and she is 5'4" tall. Aqua uses a sleeveless dark-blue Feather Dress with white trimmings (not too revealing, but not hiding anything), an extremely short dark blue miniskirt, a green bow around her chest with a blue sphere in the middle, a translucent purple underskirt and detached white sleeves with blue and golden trimmings. She wears thigh-high blue heeled boots over white stockings with blue trimmings. Sometimes Aqua wears a divine relic in the form of a translucent pink hagoromo, which can disappear and reappear around her at her will. Her hair clip resembles a water molecule. Aqua has an interesting yet troublesome personality. She is high-spirited, cheerful, and carefree, but rarely thinks about the consequences of her actions. While she doesn't force her beliefs onto others, Aqua always acts or speaks on her whims. As a result, she can behave very inappropriately in many situations. It is also very easy to taunt Aqua with jeers or lure her with praises. Since Aqua, as a goddess, thrives on praise/worship points, she usually performs good deeds, but then immediately ruins her own merits by seeking praises aggressively and persistently. Also, while many of her 'good deeds' turn out fine, Aqua is very short-sighted, and some of these 'good deeds' actually turn out to be complete disasters. One of Aqua's positive personality traits is her "honesty." She is incapable of lying, or more precisely, she has no concepts of lying and she is so bad at it that her lies give themselves away. When caught lying, all it takes are pinches to her cheeks for Aqua to reveal everything. On the other hand, she is very gullible and does not believe people can lie to her. When Aqua is being stubborn though, others may also fib a little to make Aqua more agreeable. While Aqua thinks very highly of herself, she actually has a business sense that is equal to or worse than Wiz. Contrary to popular belief, Aqua is not completely stupid. Aqua can be very observant and knowledgeable when she wants. At times, she and Megumin basically serve as the team's walking encyclopedias. Aqua simply lacks the basic analytic skills and self-awareness to use her knowledge effectively. She can be very tolerant, and will easily accept and forgive other people's imperfections and mistakes. Part of her understanding nature, though, is actually an extremely bad short-term memory, as she sometimes forgets her own identity as a goddess when enjoying her new life too much. Also, despite her apparent vanity while seeking praises, Aqua is unaware of the true greatness of her artistic and priestess abilities, as she had nonchalantly performed many extraordinary, nearly-impossible feats. Due to her traumatic experiences with giant toads and brutal alligators, Aqua acts very cowardly against tough monsters. She will often make up lame excuses on why she cannot fight or that she is "urgently" needed elsewhere. She also has very negative opinions of the undead and demons, and will be very cold and aggressive to them, although not to the same extent as Eris. She is capable of getting along with the undead after enough time to get used to them, as seen with Wiz.