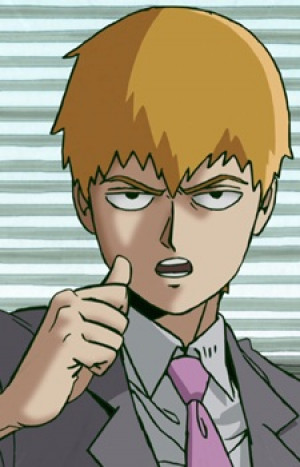 Arataka Reigen is Mob's mentor and boss. He is the self-proclaimed "Greatest Psychic of the 21st Century" as well as owner and operator of the Spirits and Such Consultation Office. Reigen is a tall man with dark brown eyes and short, reddish-blond hair with messy bangs. He is also very emotive, with his facial expressions ranging anywhere from attractive to terrifying, and is a man who has a tendency to sweat profusely. He is usually shown wearing a dark grey business suit with a pink or black tie, though he has also worn such outfits as a sweatsuit, a tank top with shorts, and a complete high school girls' uniform, though that revealed that he also has relatively hairy legs. Reigen has few to no qualms about manipulating clients, enemies, allies, and even spirits to his own advantage. Later in the series, he starts to feel guilty about manipulating Mob in particular. Conversation is his specialty. Throughout the series, he has been shown to remain composed in almost any situation, and he is extremely reluctant to admit to his own mistakes. He is very careful during his investigations, and he often confuses his adversaries by announcing his next action aloud and then doing something different. Reigen seems to be a man guided by principles and is very socially and emotionally intelligent, as he believes that hurting other people is wrong and reminds Mob of that often, demonstrating his very honorable and noble side covered by his shady business. When he entered into the Claw headquarters, the subordinates found him to be a very kind and honorable man, and even after they realized he wasn't "The Boss", they still commented on his wise and caring nature. He is even willing to carry some of Mob's burden if it means the boy will suffer less, showing that he does care about those close to him, and even told Mob he didn't have to stoop to their level and fight because he knew Mob would be hurting, showing he doesn't want Mob to feel pain. He is clever and agile, often taking action at critical moments with his special techniques. He is also a very intelligent man, being able to analyze a person's psychology fairly well and giving advice to several people which makes them better individuals, such as with the members of Claw. He is also not easy to fool, as he was the only one of the many espers who were assigned to eliminate the evil spirit possessing Minori Asagiri who didn't believe her lies. While the other espers believed it was simply the father attempting to control her and using the claims of an "evil spirit" as an excuse to justify his behavior, Reigen was able to notice things wrong with what Mogami said, such as switching from "papa" to "father", and calling Reigen a psychic despite not introducing himself beforehand. It was because of this that Mogami abandoned his charade and attacked the espers. Despite his status as a con artist, he often gives at least some sort of procedure or "spiritual cleansing" for whoever requests them. When one of his clients says some fortune teller told them spiritual negativity enveloped their shoulders, but only offered the words and didn't provide any actual service to the client, Reigen found it disgusting. Adding to that, his "spiritual cleansings" have been shown to greatly relax his clients, and many remark on how they feel much better, demonstrating his abilities as an expert masseur. He is shown to easily sense Mob's emotional state despite his student's stoic appearance, and is quick to listen to Mob's problems and offer him advice. When Mob was training for a school marathon, Reigen immediately stepped up to help him train, showing that despite his occasionally selfish tendencies, Reigen cares greatly about Mob even if there is nothing for him to gain. He finds all people to be equal, no matter what kind of abilities they have, and as thus, he believes that those with psychic abilities who claim themselves to be "superior" are simply detached from the real world. Even when he gained phenomenal psychic abilities, he just scoffed at them as no particularly big deal.