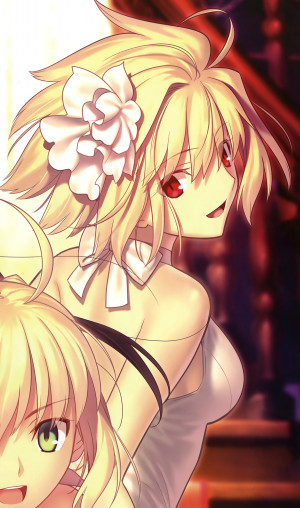 Arcueid Brunestud is the princess of the True Ancestors. She is the main heroine of Tsukihime. Arcueid is a beautiful woman with short blonde hair down to her neck, and bright red eyes. Her traditional outfit consists of a long sleeve white shirt, long purple skirt, and black boots. According to Takeuchi during a Q&A along with Nasu, Arcueid is an E-Cup. Phantas-Moon is a magical girl parody of Arcueid Brunestud that is detailed in Character Material. She wields Medea's Staff, which she stole. Arcueid is shown to be a whimsical individual who, although knowing the basics of the modern era, does not seem to know about social norms. Both Nasu and Takeuchi think of her "image color" as white because she is pure in terms of appearance and personality. Once, she shows up at Shiki's school and waves to him from the school rear courtyard, luckily for Shiki only Ciel spots her. Her behaviour is almost childlike, due to the lonely nature of her upbringing, although she is over 800 years old, she spent most of it asleep and knows nearly nothing about the world or how to interact with others. As she works together with Shiki to stop Roa, she gradually begins to enjoy life and starts to like Shiki as more than just a friend. Arcueid does everything in her power not to drink Shiki's blood, which nearly occurs several times in game as he is practically the only human at night with her, and she has problems controlling her Vampiric Impulses after being drastically weakened by Shiki's attack. She doesn't want to drink blood, as she doesn't want to become a monster that feeds on humans in order to survive. Arcueid seems to thoroughly enjoy when Shiki cooks breakfast for her. In Melty Blood, Shiki threatens to stop doing this for her if she doesn't meet him in the park that night. When Sion questions whether such a threat would ever have any sort of effect on a True Ancestor, Shiki recounts to her a time that he managed to get Arcueid to immediately apologize to Akiha when she and her were arguing by making the same threat. Later that night, Arcueid does, in fact, meet Shiki and Sion in the park. She apparently cannot stand garlic. In a scene in Kagetsu Tohya, Arcueid eats instant noodles cooked by Shiki that had garlic in them, and becomes sick. She was originally a being without emotions who never spoke. She only focused on her duties and then returned to sleep in an endless cycle. Shiki, by killing her, made her interested in something on her own for the first time and essentially "broke" her. The "airhead" version of her is something that shouldn't exist alongside her purpose as a weapon, but it was present in her foundation. She is not truly an airhead, but more childish and honest. She has a constant flow of income in the form of gold, so she has no issues with obtaining money. There is a special gold exchange shop for fugitives in the Mage's Association, and the owner of the shop gives her gold because he is a fan of her. She can be called rich, but she doesn't dress like it because she has no interest in clothing. She later changes to make Shiki happy. She also receives help from Merem Solomon, who reveres her as a "Princess." He helps her travel around the world without much trouble, booking plane tickets and trading gold for money, but she does not know what to do with his unconditional affection. Arcueid shows up as Neco-Arc in Ciel-Sensei's lessons in Tsukihime and she randomly switches to that persona in some comedy scenes in Kagetsu Tohya, though Neco-Arc seems to be her own existence brought forth by Zelretch in the Melty Blood series. When she loses control of her Vampiric Impulses, she is known as Red Arcueid. When made aware of Dust of Orisis' plans, she mentioned that it was the same delusional idea that Goetia had.