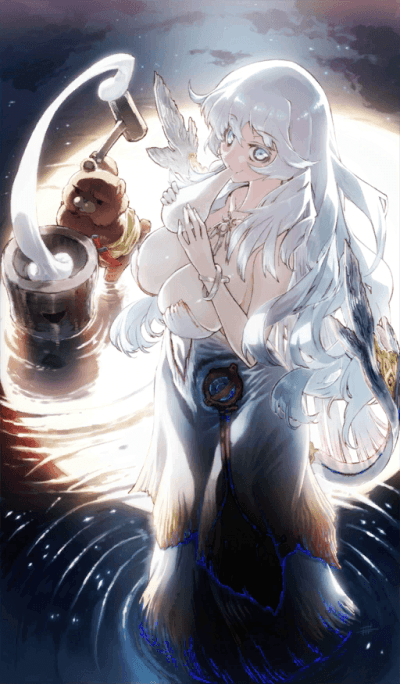 Artemis, Class Name Archer, is an Archer-class Servant summoned by Ritsuka Fujimaru in the Grand Orders of Fate/Grand Order. Artemis takes an appearance of a young woman with round blue eyes and long white hair, with the bottom of her hair attaches to a large circular ornament. She wears long white dress with red tip at the bottom, a silver necklace, and a pair of sandals. Like her origin, Artemis wield large bow which is capable of firing arrows made of pure energy as a weapon. According to the comment by the characters, this form appears to not be her original form from the Age of the Gods, but instead was changed possibly due to Orion's influence. In her later ascensions and during Noble Phantasm's animation, Artemis switch to a short revealing red dress. The height and weight belong to Artemis. Her bust size doesn't affect her bow firing ability. Artemis basically takes up a neutral position towards the Master. However, because she is a goddess, no matter how great the Master is, she always take up a higher position in their relationship standing. Orion's role is to pacify Artemis and the Master. Fundamentally, Orion has no power, so he tries to curry favor with the Master. Initially introduced as a loving maiden on a stroll in her quest for dango, Artemis is a virgin goddess at an age similar to where one falls in love with romance. Given that this goddess is a happy-go-lucky person, she has almost no regard for human life. Fundamentally, Orion's role is to keep her in check, and she personally dislikes more than anything else the words called "patience" and "preserverance". In addition, she is an utmost fangirl of everything sweet—and especially shows that enthusiasm wholeheartedly and with all of her energy towards her darling Orion. With the exception of Orion, Artemis has no interest in the opposite gender, but she really gets into love stories regardless of it being heterosexual or homosexual.