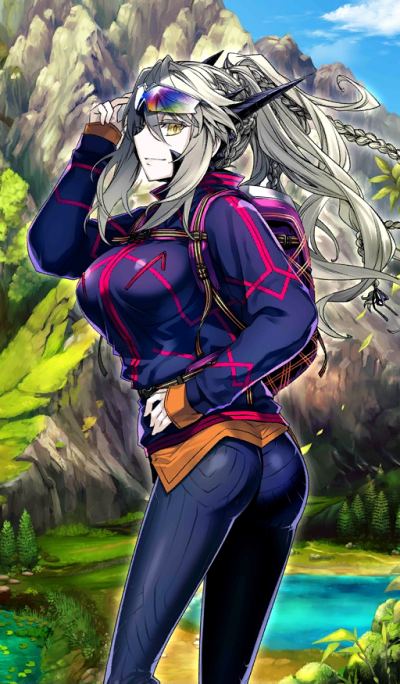 Artoria Pendragon (Alter), Class Name Lancer, is a Lancer-class Servant summoned by Ritsuka Fujimaru in the Grand Orders of Fate/Grand Order. Artoria Alter possesses the same appearance as her original version, except with paler skin and hair color. She is claded in dark-indigo and black armor with draconic feature. There are various opinions about the body weight or figure of Artoria Alter when she is a Lancer. According to differing opinions, when manifesting as a Lancer, the King of Knights is said to take on a figure that differs "in portion" to what she was while alive. Whatever that is, whether because the eternally youthful body has grown "in portion" due to possessing the Holy Lance instead of the holy sword and scabbard, or because the magical power of the lance made "a portion" of the body grow———— Even if she exchanges the holy sword for the Holy Lance, the mentality of the King of Knights and the way she ought to be does not change in a big way. She still is the same King of Knights who became a king by acquiring the sword of selection, who opposed assailing foreign enemies, monsters and occasionally even dragons, and who continued to fight to protect her homeland. However, Artoria Alter's values have somewhat changed from exchanging for the Holy Lance as her main armament. She is no doubt self-aware of herself being paranormal, of being feared by the people. King Arthur of the holy sword was a king for the nation, but King Arthur of the Holy Lance was a king that controls the nation. Her solicitude with regards to the weak changed from "solicitude pointing at her compatriots" to "solicitude pointing at the people that should be under her patronage." Her intentions, speeches and conducts has become more forceful and yet, more firmer than the times where she had the holy sword, but as far as the people is concerned, her very manner of speaking has become the views of a tyrant. It is not King Arthur as an idealist, but King Arthur tinted as a realist, and thus, she is comparatively darker. Regarding the powerful Holy Lance handled in her hand, she recognizes it has a "curse" that is bound to be a sacred thing for her. Although she is materialized with an emphasized aspect as a hero that rages in battle and is the possessor of a Noble Phantasm endowed with power on a renowned level, depending on the compatibility with the Master, Artoria Alter will probably get to serve as a "single knight" with relative devotion. She, who is summoned as a Servant, is in a state of restraining herself, and with the exception of the moments of battle, her disposition to become rough is comparatively smaller. However, that might become a different story when it consists of her choice of meals... The side of her being Britain's protector within the legends/anecdotes/events of her lifetime did not materialize during her transformation into a black color scheme, strongly tending to appear and come into existence as one fighting as a warrior, and coming about as a battle machine dashing through the battlefield, a coldhearted slaughterer who swiftly steals the lives of her opponents. Lancer Artoria Alternative, so to speak. The sign of being clad in ruthlessness all over her body resembles Saber Alternative. Even some aspects of her personality resembles Saber Alter's. For example, believing it's the duty of a hero to be hated and shunned, placing blame on herself for every life lost because of her, wishing for a supply of junk food to replenish her dwindling mana, and destroying everything that stands in her way while stating that kings and servants have nothing to do with her.