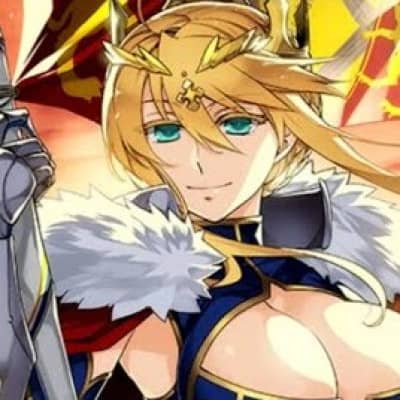 Artoria Pendragon is a Lancer-class Servant summoned by Ritsuka Fujimaru in the Grand Orders of Fate/Grand Order. __Appearance__ Artoria's appearance is similar to those of Saber Artoria, but with more mature features. Due to being a grown up version, her figure is tall and curvaceous, clad in silver and blue armor, a cloak, and a helmet carved to resemble a lion's face with mane. She tied her hair in a bun, but her hair is notably longer than her younger counterpart. In her later ascensions, she wears a gold crown and removes her armor. Unlike the soulless Goddess Rhongomyniad, Lancer's emerald eyes are full of life, having never lost her heart like the Divine Spirit. There are various opinions about her physique or body weight when Artoria is a Lancer. Having lost her growth suspension caused by the holy sword, she grew to a physical age suitable for a king. She became an existence closer to a Divine Spirit’s because she is using the Holy Lance, but given that her usage period of the lance was merely about a decade, her mental/spiritual make-up has not changed in a big way. Her body, however, has changed significantly. __Personality__ Due to the properties hidden within the Holy Lance, Artoria has changed into an existence close to that of a Divine Spirit’s, a goddess if anything. While she has become more composed, and moreover, more rational than the Artoria of the holy sword, her human nature has not been parted with. Rather, there exists placidity in her choices partly because she became an adult, attaining the ideal way a king ought to be. Artoria, who was summoned to Chaldea as a Servant, knows the beauty of the world. For the sake of taking back the world that shines even without the Farthest Ends, she will fight together with the Master, certainly wielding all the power that she holds.