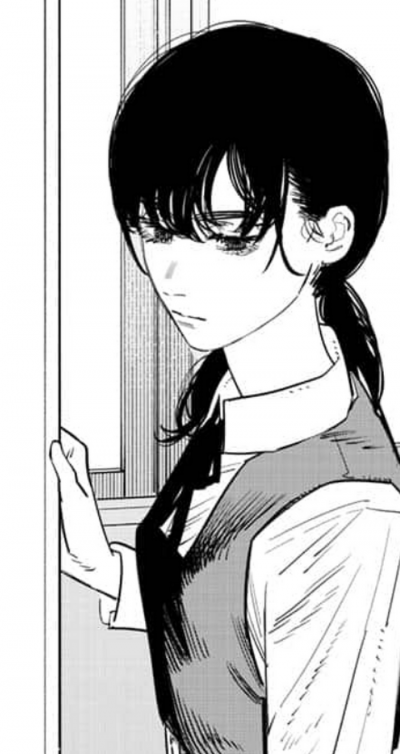 Asa Mitaka is the main protagonist of the Academy Saga. She is a high school student who became the host of the War Devil, Yoru, making her the inhabitance of the War Fiend, though she still retains her human personality when the War Fiend allows her control, making her a rare case of a living fiend host. She attends Fourth East High School with Denji. Asa is a high school girl of average build and height. She has brown eyes and black hair that is sometimes colored with a purple tint. Her hair reaches the middle of her back and she wears it in two low twin tails, making it appear shorter. When possessed by the War Devil, her appearance changes somewhat. Her hair is usually worn loose, multiple scars appear across her left cheek and nose, and her eyes have a spiral pattern similar to Makima's. She wears the same school uniform as the rest of the girls in her class. The uniform consists of a long-sleeved button up shirt worn beneath a pinafore style dress with a pleated skirt that extends below the knee, a bow at the collar, a wide belt at the waist, and black, knee-high socks. She also wears sneakers. Asa is initially a quiet and unsociable girl. She dislikes her classmates, frequently wishing they would drop dead and spurning any offers of friendship, and she would prefer to study over making friends. She dislikes all Devils as a result of her parents being killed by one. Asa later realizes that she was truly jealous of her peers, and wanted to fit in with them as well. After Asa becomes the host of the War Devil she gets a second chance at life and resolves to live more selfishly, to have the things she desired, like friends and a boyfriend. Asa admits she use to not care if she lived or died, but when she is later saved by Chainsaw Man, she realizes she is glad she isn't dead and is no longer as negative towards other humans or towards all Devils. She appreciates Chainsaw Man for saving her life, but is still willing to work with Yoru in order to defeat him. Despite wanting to live more selfishly, Asa is fairly altruistic, putting herself in harm's way to save others even when she is afraid. She wants to believe that as long as her heart is in the right place, it's okay to make mistakes. However, she still tends to assume the worst of others, often interpreting actions and intentions of others as being more mean-spirited than they actually are, such as believing Denji sold cigarettes to others solely to benefit himself, unaware that he was raising money to afford Nayuta's university tuition. Asa wants to help Yoru defeat Chainsaw Man as quickly as possible, since Yoru makes her and the people around her miserable. Asa would be willing to endure her situation if only she were to suffer, but refuses to drag others with her. However, she is also willing to kill a human by turning them into one of Yoru's weapons. At first she tries to compromise and suggests killing someone who "deserves it", like a criminal. But when Yoru makes it clear that Asa has to feel guilt over the person she kills, she still considers sacrificing someone whom she doesn't like, even if she doesn't think they deserve to die. Asa doesn't think of herself as a good person. Though she considers it, Asa can't murder a person in cold blood, as she is obsessed with following the rules and doing the right thing. However, Fami believes that, like most humans, Asa can throw away her morals under the right circumstances, like starvation. Asa later admits that she has no idea what is right or wrong, and that her decisions are driven by an attempt to avoid making mistakes. Despite her efforts, Asa's choices almost always end with disastrous outcomes. Asa suffers from low self-esteem and considers herself a clumsy individual, shown at several important points during her lifetime when she would trip and fall, most importantly when her home was destroyed by the Typhoon Devil and her mother sacrificed herself after Asa fell trying to save a cat. Asa feels guilt and incredible pain of her mother's death and the circumstances surrounding it, and greatly cherishes her memory. She can also be prone to embarrassment and becomes flustered when dealing with awkward situations, such as when she and Yoshida were partnered up together shortly after Yoru, whilst possessing her, tried to hit on him. When Yoru is in control of her body, Yoru's personality takes over. Still, Asa can observe Yoru's actions and is usually against her more violent and head-on methods. Asa is very attached to cats, shown by her trying to save one while being attacked by the Typhoon Devil, and later saying she'd rather kill a human than a cat. Asa can be extremely socially inept in novel situations for her, such as romance and going on a date. She believed that going to the library to learn everything about ocean facts, so she could recite them to Denji while on their date at an aquarium, would make him easily fall in love with her. Asa also believed that boys can fall for a girl easily as long as they are shown a fraction of a good time. This also shows how Asa can be falsely self-assured and overconfident in situations. When Denji showed no inclinations towards her and ditched her to look at penguins, she was confused, believing he should have fallen for her by that point because of her plan, and refused to admit that the reason the date wasn't working was because she was boring. She later admits that the reason she's a "total bore" is due to her not knowing what is right and wrong. Her attempts of trying not to make mistakes often leads her to make them.