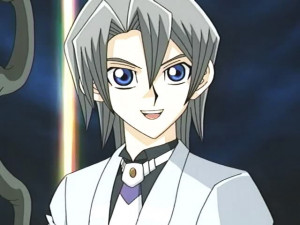 Aster Phoenix, known as Edo Phoenix in the Japanese version, and commonly romanized as Ed Phoenix, is a child prodigy, world famous, top-ranking professional Duelist. He is adored by fans around the globe, and his celebrity status has done wonders for the game by introducing it to the masses.An intelligent vigilante Aster is a professional Duelist whose belief in destiny draws him into confrontations with the most skilled of opponents. Aster is well-mannered (much more so in the Japanese version) with good intentions, but can often be blinded to the reality of a given situation due to his stubborn attitude and pessimistic outlook. He pursues his ambitions despite risks and overwhelming odds, and feels that the burden of avenging his father and reclaiming the "Destiny Hero" stolen from him is one that he must shoulder alone. Because his father was taken from him while he was still young, he has a dependency on father figures, such as Sartorius, or his legal guardian, The D. This has, in some instances, proven to be a weakness of Aster's, as the two men have been known to exploit him with mere words, albeit they themselves were being by a malevolent force. Since his father's disappearance, Aster has also held a fear of the state of his "time", afraid that he has not truly advanced anywhere as a person following the life-changing event. As such, he uses his "Destiny Heroes" to control his opponents' future. Aster is also shown to be sympathetic to other orphans like himself. Aster’s usual outfit consists of silver formal wear with button-up sleeves, a black shirt underneath with matching shoes, and a loosely-fitting necktie. His grey hair is sectioned in two layers, his bangs forming one layer and the rest the other. His blue eyes are positioned between the layers closest to his face. He carries an Academy-issued Duel Disk on his left arm. Soruce:http://yugioh.wikia.com/wiki/Aster_Phoenix