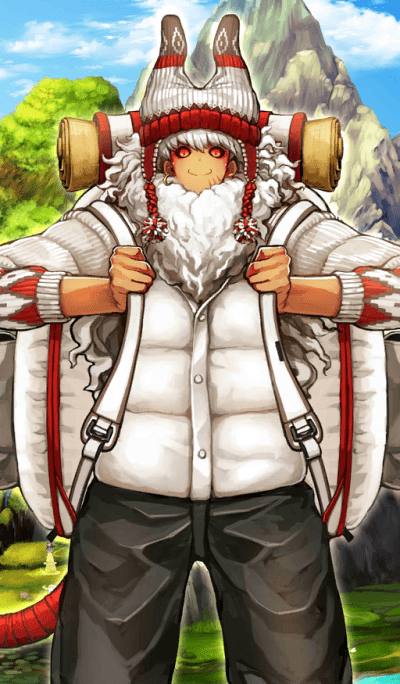 Asterios, Class Name Berserker, is a Berserker-class Servant summoned by Ritsuka Fujimaru in the Grand Orders of Fate/Grand Order. He is also summoned by Wolfgang Faustus in the Labyrinth Holy Grail War of Fate/Labyrinth. Asterios towers over most Heroic Spirits, being just under three metres tall. While not a complete hybrid between a man and a bull in appearance, he possesses animalistic traits, such as horns, a mane of wild, white hair, and inhuman eyes. Asterios is seen wearing iron armor, much like a corset, over his bulky and scarred body, iron rings around his arms, a red piece of cloth from his waist to his feet, split into two sections. Around each ankle is an iron ring with an attached chain, linking heavy, metal orbs which Asterios appears to have no problem wearing. In each hand, he holds an axe with an incredibly long pole. In his first Ascension, he wears an iron mask resembling a bull's head, reflecting his nature as the Minotaur, and carries axes with straight edges in each hand. In his second Ascension, the iron mask is removed, revealing his black and red eyes, and the axes he wields are replaced by a pair with rounder edges, named Labrys. In his third Ascension, Asterios' mane grows even longer and wilder, and his horns turn red and grow thicker. The outline of Asterios' life was that of a monster that would be defeated by a hero from birth; indeed, Asterios was slain by the hero Theseus, who had sneaked into the Labyrinth. Even if his essence was not wicked, since his deeds were evil, his fate was to be brought down. Even if - what he sought was not darkness, but light. Even if - what he sought was not a gloomy maze, but the refreshing wind of nature and a plentiful forest. Asterios is a Berserker and his words are faltering, but it is possible to barely come to a mutual understanding with him, so he is by far more docile than the other Berserkers. So long as one perceive Asterios as "Asterios", and not as the "Minotauros", he will not betray them. Due to his blood as a human being slightly remaining, a conversation is possible, but it is only a small chance for it to happen. Asterios is intelligent like a child, but he is extremely wise. He also understands ethics, common sense, etc., as a human being, and for that reason, he always lives while holding feelings of guilt towards his very existence itself. Asterios usually loiters around Chaldea, playing with Euryale.