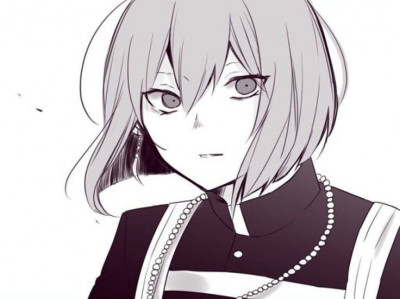 Astolfo is a teenager with medium-length, straight, pastel pink hair that is cut in a page-boy way. His eyes are a pinkish red and he wears an earring in his left ear that appears to be the tooth of a vampire. As clothing he wears the black Chasseur cleric uniform as well as a beige harness that includes a little box for the Chasseur drug. Moreover, his sleeves end in white cuffs, and his hands are covered by grey, fingerless gloves. Around his waist, he wears a blue scarf that reaches past his knees. Also, he wears black pants, white boots with red soles and red laces, and a rosary in the colour of the garnet stone, a deep red. At other times he’s seen wearing a dark grey coat, a white scarf and a black tophat, or the long Chasseur coat. Usually, he carries his spear ‘Louisette’ with him. He had thirteen marks of possession of which five are left. Looking at official art, they’re presumably situated on his throat, his right arm, his waist, his lower back and his leg. Astolfo is generally a very emotional person who quickly loses composure. He is short-tempered and very easily to rile up when mentioned anything that’s triggering to him, for example being reminded of his family or Roland, his senior. He is widely known as the Chasseur’s problem child, his one and only goal being to destroy every single vampire in the world to cleanse it. This leads to him attacking everyone who he thinks might be a vampire, no matter who else might get hurt in the process. His definition of being a Chasseur isn’t saving humans how it is supposed to be like, but hunting and killing vampires. Because of that, he has no problem with killing people and even seems to enjoy it. If he is too weak in a fight, he has no restraints in using the Chasseur drug or even overdosing on it. Apart from wanting to kill vampires, he is also quickly thrown into a rage by mockery and anything related to his family, since he blames himself for their death. Furthermore, he gets mad at being compared to Roland, making him known as a “Roland-Hater” in public. The thing that irks him the most about Roland is that he’s seemingly inferior to him. He also doesn’t like being called a girl despite his androgynous appearance. All those things make him a person who’s rather simple to manipulate. When someone mentions vampires or when he sees one, he clutches onto his arms and buries his fingernails in them, which might be his coping mechanism. Even though Astolfo is an antagonist, he also has his good sides. He’s very determined and stays polite towards strangers. Additionally, he seems to be good with children in the present as well as in the past, as he cared a lot about his little sister. He may lose sight of his task when a vampire appears, but he eventually knows when to return to the task he’s been ordered to do by the church. In the past, he appeared to be a kind-hearted boy who saw humans and vampires as equal. It’s established that he can’t be saved as easily as, for example, Chloé and Jean-Jacques in the Gévaudan arc because of how conflicted he is feeling with himself.