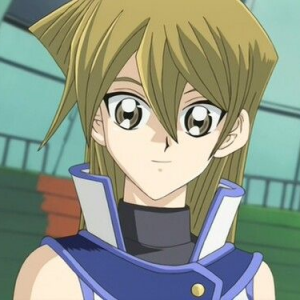 Alexis Rhodes, known as Asuka Tenjoin in the Japanese version, is a strong female Duelist from the Obelisk Blue dormitory at Duel Academy as well as one of Jaden's closest friends. She usually serves as the only female protagonist in Yu-Gi-Oh! GX, though Blair begins having a slight role as well near the end of the series which is further proven by Alexis's downplayed role in darker seasons. An alternate universe version of Alexis appears in Yu-Gi-Oh! ARC-V. Alexis' character design was overseen by Kenichi Hara. Her usual outfit consists of the standard sleeveless female Obelisk Blue uniform which consists of: a blue skirt combined with a belt colored in a light blue hue, white socks, blue boots, a sleeveless jacket made of white colored fabric with some blue marks around the collar and on the front side in chest level. Her attire also features an optional pair of fingerless gloves which reach from wrists up to her elbows. Her long, dark blond hair is sporadically arranged, with a large portion trailing the upper part of the nape of her neck. She has hazel eyes. She carries an Academia Disk on her left arm. During her senior year, she carries a Duel Disk with blue trim representing the Obelisk Blue dorm on her left arm. Alexis is generally very confident, sweet, caring, brave and strong willed, yet she does not follow the crowd nor does she regard herself as better than other people like many of her Obelisk peers, though she does show some respect for them, (like during her duel with Chazz). Alexis is known well for her beauty, and many male characters throughout the show demonstrate infatuation with her. Because she is the most beautiful girl in Duel Academy while also a great duelist, she has earned the names "Madonna" and "Queen of Obelisk Blue". However, she is kind, humble and not prideful, and does not intentionally use her looks to her advantage, which most likely attracts the male students to her even more. Syrus, Chazz, Pierre the Gambler, Harrington Rosewood, and Bob Banter have all gotten in duels and dilemmas for her affections. However, she has stated often that she does not want a boyfriend, and therefore has never gone through with anyone's interest in her. Ironically, as the series progressed she actually developed a crush on Jaden, whom was one of the few males not to show infatuation with her. Her crush on him progressively became more obvious and stronger though she never had the courage to tell him. She finally wanted to confess her feelings to him at the end of episode 162, but decides not to and instead just says she was glad to have met him. Alexis has put herself in danger to help her friends many times. She has strong confidence in her Dueling skills, but she does not act vain about it, unlike Chazz, Aster, and sometimes Jaden. Alexis also tends to act more quiet and reserved than Jaden's other friends. She tries to stay alongside Jaden and support him in defeating evil throughout the series, but often finds herself in trouble and needing his rescuing. After Alexis lost her Duel to Chazz and was brainwashed into joining the Society of Light, her personality changed dramatically. She became extremely rude, arrogant and insulting towards Jaden and the others, and began making more sarcastic comments. She also began to call Jaden a "dork" and "loser" and saying he should "get a new line", and called Syrus and Hassleberry "dweebs". She talks back to her peers more frequently as well. This all ended when Jaden defeated her and undid her brainwashing.