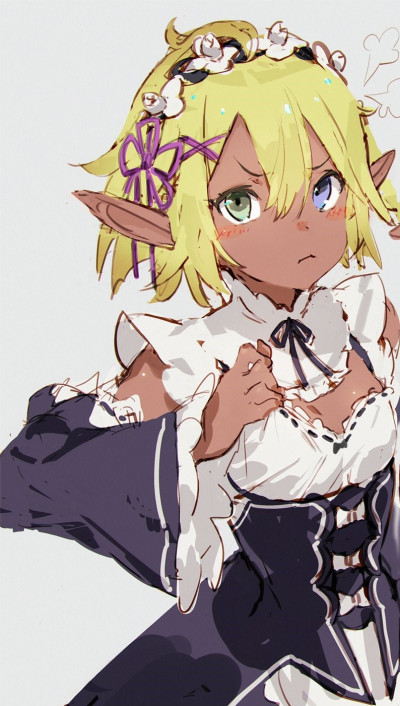 Aura Bella Fiora is a dark elf and one of the twin Floor Guardians on the 6th Floor in the Great Tomb of Nazarick. She is the older twin sister of Mare Bello Fiore and was created by Bukubukuchagama. As a beast tamer and ranger, she is capable of controlling magic beasts and is a master of guerrilla warfare. Aura is a tomboyish looking child with dark skin and pointed ears, a signature trait of the dark elves. She has golden hair and heterochromia, her left eye blue and right eye green. She wears reddish-black dragon scale leather covered by a white and gold vest embroidered with the sigil of Ainz Ooal Gown. Below it, she has a matching set of white trousers and gold plated shoes, and around her neck is an acorn necklace emitting golden light. She is equipped with a whip around her waist and a giant, decorated bow on her back. In addition, she wears a watch given to her by Ainz, which has her creator's voice recorded on it. Unlike her brother Mare, Aura is a very cheerful, tomboyish girl who is often straightforward and blunt with her remarks. She dominates over her brother, often dragging him around and telling him what to do. At first glance, she does not appear to get along with Shalltear and will usually get into small quarrels with her, but in reality, the two of them are quite close as if they are true sisters. She also inherits this from her creator. Aura also has a collector's spirit when dealing with creatures. In the New World, she wishes to add any new unfamiliar creature she finds into her collection of beasts. However, Aura's behavior and actions when talking about Kyouhukou's cockroaches, and later, when Ainz orders her to deliver Hekkeran and Imina to Gashokukochuuou, shows that she has a fear of insects and other such creatures, which is unusual, given her role as a beast tamer. Like all NPCs of Nazarick, Aura is completely loyal to Ainz and will sacrifice everything for his sake. She carries out her duties with great zeal and will give up on her own interests if she is ordered to. She misses her creator Bukubukuchagama dearly and enjoys hearing her voice from Ainz's watch. However, she can be outspoken about Ainz's perverse action. According to Maruyama, since Aura inherit some of the heart of Bukubukuchagama, Aura was the kind who would act in the same manner as her creator who might speak up to the little brother’s friend.