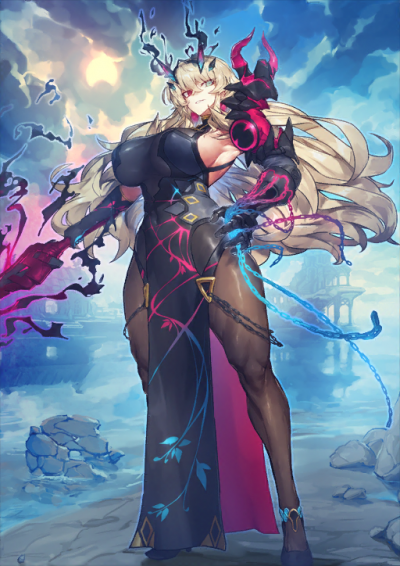 Barghest, Class Name Saber, is a Saber-class Servant summoned by Ritsuka Fujimaru in the Grand Orders of Fate/Grand Order. Diplomatic and passive. Without hiding her feelings, she will share her intentions in a straightforward manner and then confirm the other party's feelings. She is a majestic and proud knight who doesn't feel ashamed in front of anybody, but when it comes to her (military) actions, she is the careful type who will take a proper look at the state of affairs first before making a move. Only after seeing not only the convenience of one side but also the convenience of both sides, she takes up her sword, saying, "Let's annihilate the weaker one." Once on the battlefield, she is said to be a ruthless knight that mercilessly overruns the weak. Although she has a straight-laced personality, since she has a noble upbringing (well-educated), she has the composure to appreciate jokes and has a fundamentally amicable way of thinking. However, since the person herself is not good at telling jokes or making others relax through the art of conversation, she isn't too talkative. Perhaps due to considering the rule of survival of the fittest as absolute, she lets her guard down around those who feel "strong" to her, growing close to them and taking them as her lover. In truth, she is someone who easily succumbs to loneliness so she is quick to fall for others. In the past, she has taken many races...without distinction between men and women or fairy folk and humans...as lovers. However, those relationships didn’t even last a month and she returned to being single right away. Due to this, others call her a fairy full of love, but she receives cutting remarks from the Fairy Knight Tristan such as "I am simply the type to get bored easily; I am not at your level where you fall for others left and right". This is because she is compelled to seek out and ultimately devour strong mates in order to strengthen herself when the time comes for her to become the Black Dog; though she has tried to resist these cannibalistic urges and learned to love those who were weaker than herself, it only caused her instincts to force her to consume her loved ones instead. As the Black Dog, Barghest is little more than a raging monster that slaughters everything around her indiscriminately, with no trace of her original personality left. She hails from the Fang Clan and, in human terms, she'd be a young lady from a count family. As a Fairy Knight she might behave in a stout-hearted and cold-blooded manner, but at her roots, she is kind and easily moved to tears.