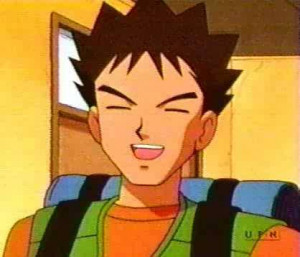 He's the best waifu. Always ready to cook something with his frying pan. Brock is an aspiring Pokémon Doctor from Pewter City and a former traveling partner of Ash. Brock is considered the most mature, wise and level-headed of the main characters, and he is arguably the most intelligent character as well. He often acts as an older brother and caretaker to the other characters and a voice of reason in disputes. He will usually place others before him and will help and support his friends even against his better judgment or at his own expense. While he is not shown to battle often, he can understand the situations and strategies in any Pokémon battle, and often explains them to the other characters, probably due to the fact that he was once a Gym Leader. His wisdom is possibly derived from how observant he is; he can tell just by sight how a Pokémon is feeling. Despite this, all his maturity and rationality leaves him completely, at the sight of a beautiful woman. Brock has a desperate need for female companionship which grows worse as he fails to gain it. He will do anything and everything he thinks will impress women, which inevitably ends with his heart being broken every time. A few women have shown interest in him as well, such as Wilhomena, Temacu, Natalie, Lucy, Holly, Autumn, Narissa and Lizabeth, but most do not notice him or are not interested. No matter how many times he is disappointed, though, Brock remains determined to find a girl to start a relationship with, and has indicated several times he would stop traveling with Ash and stay with the girl if this happened. This behavior tends to wear on the nerves of other characters, and Misty and Max have both commonly dragged Brock away from women by his ear. Some of Brock's own Pokémon, most notably Croagunk, have attacked him for getting too flirtatious with women. (This waifu has been approved by mods.)