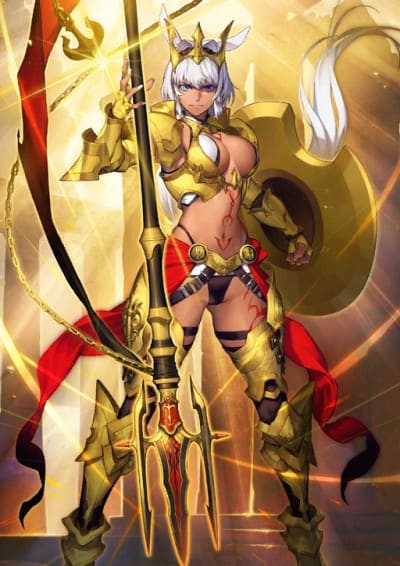 Caenis, Class Name Lancer, is a Lancer-class Servant of Kirschtaria Wodime appearing in the Grand Orders of Fate/Grand Order. She is also summoned by Ritsuka Fujimaru. Although she currently has the physique of a woman with a more masculine face, different characters refer to her with both types of gender pronouns. Kirschtaria and Kadoc Zemlupus use male pronouns, while Ophelia Phamrsolone uses a male pronoun but corrects herself to a female one. As Caenis’ ascension progresses further and further, the Noble Phantasm which consists of Poseidon’s protection and blessing becomes more and more present. From this Caenis becomes closer and closer to regaining the form held when once alive. In other words an unparalleled existence with a magnificent suit of armor that reminds us of Poseidon. Furthermore, Caenis’ spirit origin was formed with a massive increase in power that was a result of Poseidon’s favor. Already at a point beyond what is a Heroic Spirit, Caenis has appeared as a Divine Spirit before us. In addition to whether Caenis literally became physically male in human history or not, Caenis's gender on a personal level is unclear. On one hand, it seemed as though she was frankly disappointed by not being summoned into her male saint graph; likewise, Wodime uses male pronouns for her. However, her dialogue with Da Vinci indicates she does not relate to the idea of transitioning in gender to make one happier with their overall self, or found it strange. Finally, the datamine places Caenis's gender as unknown; it isn't certain if this is literal or has to do with her broader saint graph. "What I hate is the ocean. What I hate is God." Though holding enough anger to have aptitude as an Avenger, Caenis usually does not feel anger in such a way. When in a good mood, you can see a bright smile on Caenis' face and even if Caenis is not in a good mood, if you try to start a conversation, you'll get an answer while going along with any sort of idle banter. Having a sweet tooth, Caenis would definitely be beyond pleased if the subject were to come up! However, once the anger found within has been set ablaze, it is beyond uncontrollable. Even becoming willing to kill Master, and at times entering a frenzy that rivals that of a Berserker. The reason why Caenis, who hates, scorns, and loathes every deity, served obediently, wasn't only due to Wodime's exceptional charisma. Wodime told Caenis in detail the truth of his intention, "the reorganization of the Age of Gods". Turning all the humans into gods and reorganizing the Age of Gods――― In short, the gods of olden times would all lose their way of being. Of course the ancient gods of Greece too, and the target of Caenis' fury, the sea god Poseidon as well! "Sounds good, it's the best settlement!" Caenis greatly supported Wodime. In that case I will display the protections and blessings of the sea god that are endowed in this body as a Noble Phantasm to their fullest! Caenis, not unlike perhaps Mordred, has a brash demeanor, a short temper and a sharp tongue; however, she also has a more brutal background and expresses it with various types of physical threats. In Anastasia, if she was not putting up an affect, this was also sexual in nature. She is also brutally honest at times, such as saying that because Musashi is a similar person to her, she must also be for the same reason a bad person. Indeed, reflecting the vices of bronze-age Greek heroes, it seems at first that Caenis is a "might makes right" tyrant character. Being a victim of tyranny and the gods, while also bestowing tyranny and using the powers of Poseidon, Caenis is empowered by everything that has harmed her, and it may account for her emotional and dangerous tendencies. There are, however, limits to this, and her excitement if you summon her post-Olympus indicates a much friendlier side - at least among those she considers comrades. In reference to Mordred, what they have in common makes the both of them get along, even as training partners. Caenis also adheres to principles of Xenia, the essential Greek value of hospitality. Finally, it seems as though Caenis deeply respected her master and his greater vision, and in turn was quite loyal to him; even after being summoned by Ritsuka she has to remind herself that Kirishtaria is no longer her Master. At bond level five, it appears that there is a hidden frail side that is still in pain from her past trauma with Poseidon, and likely the closest thing to her original feminine character.