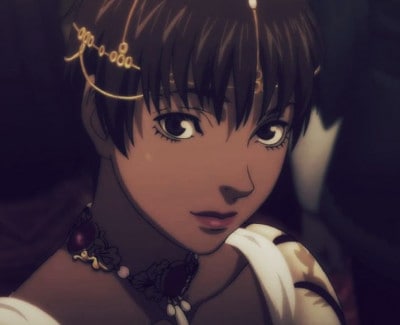 Casca is a former unit commander of the Band of the Falcon and an estranged companion of Guts. Originally a callow peasant girl living in a remote mountain village, she develops into a well-attuned warrior upon joining the Band of the Falcon and aids greatly in the group's storied successes during the Hundred-Year War. Following Guts' departure and Griffith's subsequent imprisonment, she is forced to assume the position as the band's leader, succeeding in preventing the complete annihilation of the Band of the Falcon and rescuing Griffith from the Tower of Rebirth. Crippled from his horrifying year-long torture and demoralized by his fall from grace, Griffith ultimately invokes the Eclipse, in which he is reborn as the fifth God Hand member Femto and rapes Casca to spite Guts. Having physically survived the ordeal, she regresses into an infantile and largely mute amnesiac. Guts and his newly formed traveling party are currently preoccupied with the restoration of her fragmented mind in Elfhelm. Prior to the events of the fifth Eclipse, Casca proves to be a determined and capable leader within the Band of the Falcon who merits the respect of her comrades in arms. So great is her leadership that she is able to rally the band behind her in their moment of utmost peril and prevent the complete annihilation of the fugitive band for a year following Griffith's imprisonment.[9] She fosters morale among the rank and file of the band, who in turn affectionately call her "Big Sis". Even amid the Eclipse, Casca does not allow the Falcons to panic, commanding them to assume formation and contribute what they can. Casca's hardened appearance and austere attitude can be seen as unfeminine, prompting Judeau's initial observation that she "gave up on being a woman in order to become a mercenary". In actuality, her womanhood forms an integral part of her identity; she wears men's clothing for its practicality in battle, rather than because of any inherent desire to do so on her part. Occasionally, her status as a woman is the source of her perturbation, though she masks such doubts with an exterior of sternness, lashing out with physical violence in moments of vulnerability. Beneath this guarded exterior, however, Casca yearns for acceptance as both a warrior and as a woman, which she originally desires from Griffith. Her loyalty and devotion to Griffith seed within her a yearning for strength, wanting to serve as his able sword in the pursuit of his dream. Because of this, she initially harbors resentment for Guts, jealous of the swordsman's superseding importance to her idolized leader. Eventually, Casca comes to acknowledge the unrequited nature of her admiration for Griffith, while also developing equal affection for Guts, growing beyond her dependence on Griffith's dream. Notably, when Griffith resolves to duel Guts in an attempt to prevent him from leaving the band, Casca interjects, questioning her leader's challenge – an action Judeau notes she would have never taken previously, as she considered Griffith's will akin to gospel. She later begins falling in love with the swordsman after his acknowledgment of her as both a capable warrior and as a woman, cultivating a relationship based on mutual honesty rather than one-sided reverence. Femto's rape of Casca during the Eclipse inflicts severe psychological trauma upon her, which causes her to regress to a largely mute, infantile state in which she is unable to truly think or feel. Though capable of a primitive form of empathy, she is left unable to process people's feelings beyond immediate situations; she does, however, display motherly affection for her demon child and the Moonlight Boy, becoming distressed when they suddenly vanish or are in harm's way. In her fragmented form, Casca remembers fondly her days as a Falcon, though deeper within her psyche, her mental imagery becomes starkly hostile and revolting – a defense mechanism safeguarding her most repressed memory fragment.