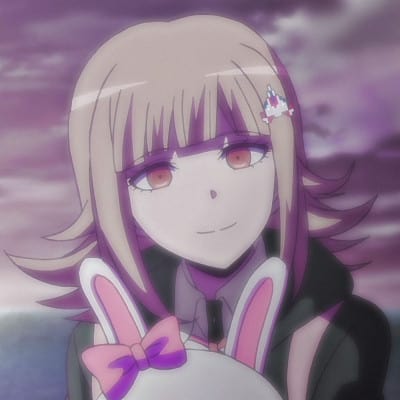 Chiaki Nanami, is a student of Hope's Peak Academy's Class 77-B, and a participant of the Killing School Trip featured in Danganronpa 2: Goodbye Despair. Her title is the Ultimate Gamer. The AI takes the appearance of the real-life Chiaki the same age she was during her time as Hope's Peak Academy. Chiaki has short, pale mauve hair which is slightly curled outwards, though the locks on either side of her face curl inwards. She has short straight bangs and wears a white clip in the shape of the spaceship from Galaga to the side of her face and has pale pink eyes. She wears a one button dark teal-grey cardigan with a symbol on the chest pocket and a hood that has pointed ears on the top and two pink eye-like markings on the front. She also has stripe decorations at the bottom of her cardigan that appear to pale gray. Chiaki is often seen wearing a paler pink cat-like backpack as well that has a white ribbon and a white pocket at the bottom. Under her hoodie, she wears a white buttoned shirt with a black shirt line, with a pink ribbon and a pale beige skirt. Chiaki also wears black thigh high stockings and light pink mary-jane style shoes with white soles. She is seen wearing a ruffled white bikini with a ribbon and ruffled pants during Chapter 2, which also reveals that she has a beauty mark on her right breast. Chiaki normally has a quiet and sleepy disposition, but she becomes a lot more lively when discussing games and concentrates hard when playing. She has a number of unusual habits, such as dozing off while playing games and taking long pauses during her conversations to think about everything she wants to say. She sometimes even sleeps while standing and forgets to breathe when she's playing games. She also quite often uses gaming terms and references. Chiaki is very calm and she once mentioned that she has never screamed. She often helps Hajime Hinata during the Class Trials and provides important points. She can be stern and bluntly honest, even at times forgetting to take other people's feelings into consideration. While Chiaki is extremely observant and analytical, she lacks knowledge on a variety of ordinary subjects due to the nature of her existence. For example, she doesn't know where milk comes from (she mentions that she knows how babies are made, though). She doesn't really understand how romance or love works, is very curious about it. She also feels a bit uncomfortable around animals, because they're unpredictable and feel warm when touched, which is "a bit scary" in her opinion. She is occasionally a bit playful and tries to make jokes or play little pranks on Hajime, though they're a bit weird and sometimes borderline creepy. Chiaki usually ends her sentences with a negative note even though she actually means to compliment someone or cheering someone, such as "...I think", or "Maybe...". Hajime once said that sometimes he wishes that Chiaki would end her positive sentence on a positive note. However, she truly does care about and wants to protect everyone. She dislikes killing more than anything and she gets very serious about the topic. She is the nicest towards Monomi and she is very understanding towards Nagito Komaeda, even though his actions frustrate her. While she is based on some of human Chiaki's traits, AI Chiaki differs from her in some ways. Unlike the human, she appears constantly sleepy and her way of speaking is much less natural sounding. As an AI she also appears unusually calm and unfazed, even during her own execution, which is very different from the human Chiaki's much more human and painful reaction. She also has her own identity as an AI created by Chihiro, considering him her "dad" and Alter Ego and Usami her siblings. Some of Chiaki's behavior also appears a bit childlike, most notably her handwriting and drawings that resemble ones of a young child, which could be a result of her being a relatively young AI. However, she matures throughout the course of the game and in the end, she even seems to be able to resist her programming, albeit just a little bit.