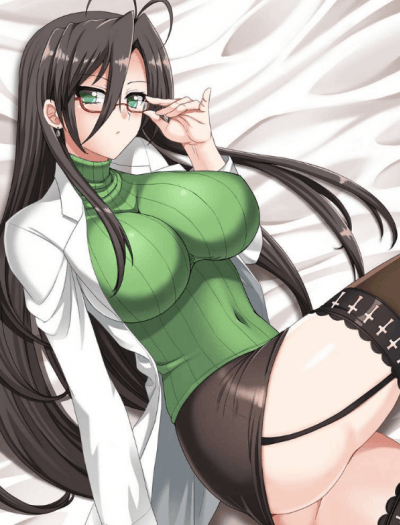 Chisato Hasegawa, real name was later revealed to be Afureia in Volume IV, soon became one of the main female protagonists. She is known around Hijirigasaka Academy's "all too beautiful" school nurse and a former high-ranking god amongst the Ten Gods of the Divine Realm. Chisato is also the younger cousin of Raphaeline, making her the cousin-once-removed of Basara Toujou. At first, she acted as a mentor for Basara for the several issues in his life when he's protecting Mio Naruse and the others from various threats unbeknownst to him, but she later develops genuine romantic feelings for him, leading the two of them into a secret romantic relationship for the majority of the series. Chisato is an stunningly attractive woman with sexy hip-length black hair that has bangs hanging on the right side with two ahoges, green eyes, a mole under her left eye, red round glasses, one earring on her left ear and a voluptuous figure. She has very large breasts, being even larger than Mio Naruse's, and her butt is bigger than Yuki Nonaka's. Her work outfit consists of a green knitted turtleneck, a tight black mini-skirt along with her cross garter motif stockings, and her signature white lab coat. Chisato wearing her white lab coat is the sign that she's still doing her job and acting as a teacher, but whenever the lab coat comes off she gets to just be Basara Toujou's woman. With her casual clothes Chisato usually tries to maintain a strong sense of adult appeal, but depending upon her mood she's open to being more frilly and girly. During the winter, Chisato wears a long white coat, with a mutton scarf, and low heeled boots. In warmer weather, Chisato wears a short coat, a fluttery flare skirt, and cute accessories. In the privacy of her apartment or the Toujou house, Chisato wears sheer silk baby dolls, decorated with lace to show off her breasts and butt. At the pool, she wears an extremely revealing green sling bikini that exposes about as much of her body as possible. In her Afueria form, Chisato gains a golden aura. Her hair color changes from black to gold with blue colors. Chisato was initially shown to be a wise and caring person proven to be almost completely shrouded in mystery. Through the series, she is noted to give Basara advice when he's caught up in situations that he couldn't solve on his own, as well as being someone capable of giving advice to other students, despite her being a nurse. She mentions that female students sometimes ask for advice about men (despite not having experience with a man). She has proven to have a stronger attachment towards Basara, more so than the other students, to the point of asking for assistance in taking off her swimsuit and inviting him to her apartment for dinner. Chisato even started to make more sexual advances toward Basara and progressed to them having a secret relationship, accepting all of the advances he makes toward her without refusing. Despite being calm most of the time, she can be jealous of all the other girls who're in love with Basara as stated several times when he already spends more time with them rather than herself. Chisato doesn't like it when Basara talks to the others as noted when he was talking to Mio and the others over the phone when she was spending time with him in Volume VIII, even teasing him over the phone as punishment for taking too long. She can also show intense anger towards those who attempted to kill Basara as proven when Ornis tried stealing Banishing Shift and kill him due to jealously, which was attributed due to the fact that he caused Basara to distrust and even point his blade at her. To match with Basara becoming more sadistic in making the others in his harem submit to him using the Master-Servant Pact, she has become more of a masochist, desiring to fall from being one of the highest-ranked gods, a member of the Ten Gods, into being his sex slave, as well as a teacher who fell to one of her students, a fact that she sees as being the most depraved.

No images found
Want to see more from the gallery? Register or Login
teacher glasses