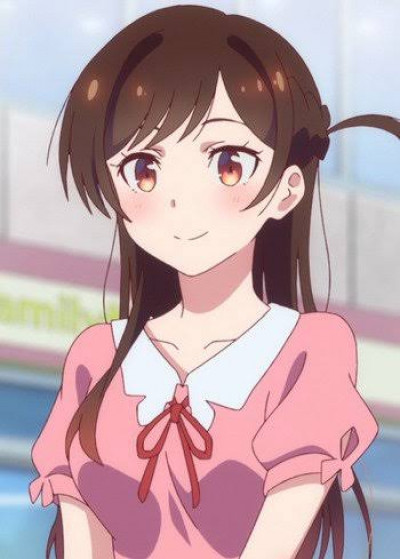 Chizuru Ichinose, alternatively known as Chizuru Mizuhara in her "rental girlfriend" persona, is the main female protagonist of the Kanojo, Okarishimasu series. She is a college student at Nerima University who is majoring in Literature and she currently lives in Room 204 of Royal Hills Nerima, just next to Kazuya Kinoshita. Chizuru has waist-length chestnut-brown hair that is most notably tied with bangs hanging on the right side and light brown eyes. When posing as a diligent student, she wears glasses, a butterfly accessory and she sports double braided hair. It is later revealed that she does have sight trouble and she uses a pair of contact lenses when she is not going out with her friends. Her presentation is represented as being a madonnna; possessing a beauty that one can only ever dream of having; light clothing, makeup, and accessories. At a glance, Chizuru puts up a kind and considerate front: It surprises anyone who considers renting, which makes them give high ratings to her. However, she only does this to her customers. In reality, she is sharp, brash, and calculative; showing her true self to people she dislikes or has to put up with. However, she does display a genuine kinder side when she sees people in need or when Kazuya needs her help. She gets annoyed when Kazuya introduces her to his grandmother. Chizuru told Kazuya immediately to tell his grandmother that they broke up, but she'd blush and get embarrassed when she hears Kazuya talking about her with his grandmother. According to Sayuri Ichinose, Chizuru used to be a 'clingy crybaby', something that she has overcome over the years. Still, there is a chance that she just hides it with her perfect facade around others. During her junior high school years, Chizuru became a delinquent and often fought with boys. However, her grandpa guided her to believe in her dreams and become someone that helps people. This led to Chizuru greatly focusing on becoming an actress when she found Sayuri's old DVD. When Sayuri is seemingly close to her end, Chizuru showed more of her weak side that she refuses to accept a 'sad truth' after Kazuya had decided to give up on keeping the lie as he felt guilty to keep lying to a dying person. The trauma of the sad truth is from how sad she was during her spirit to chase on her dream and wishing her grandpa to see her before his death from the accident.