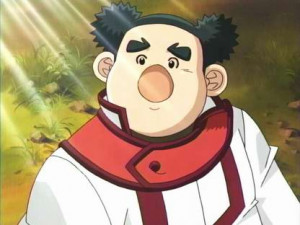 Chumley Huffington, known in Japan as Hayato Maeda (前田まえだ隼人はやとMaeda Hayato), was initially a Slifer Red Duelist with an extremely pessimistic outlook but gradually grows Chumley is portrayed as a lazy and gluttonous Duelist who could never win a Duel and hated exercising. Though a loyal friend, he was never really into putting himself in any danger, being a very reluctant participant. However, he would prefer his friends over any amount of grilled cheeses.In the dub, Chumley is obsessed with grilled cheese sandwiches. It is said at one point he creates a Grilled Cheese Spell Card. His obsession with the food leads him to use phrases such as "lischus" and "not lischus" as positive and negative assurance respectively, the words being derived from "delicious.”In one episode, it is implied that he speaks French. Chumley was forced to retake his freshman year after he failed his first time around. His best friends, Jaden Yuki and Syrus Truesdale, come to Duel Academy, and encourage Chumley to gain more confidence in himself. Throughout the series, Chumley participates in only two Duels: the first against his father, Mr. Huffington, and the second against Dr. Crowler.His father believed that his son's efforts at Duel Academy were wasted and that he would be better off leaving. To put an end to the conflict, Chumley struggled valiantly against his father's special tactics, but ultimately lost. Despite this, he allowed his son to continue his studies, as he saw that Chumley had actually learned something, and that his friends would always support him His usual outfit consists of the standard Slifer Red uniform, though its colors are inverted to include a larger section of white than red. His face, build, and hairstyle were made to resemble a koala. As conceived, the character was very muscular, but his muscle tone is removed from the dub to make him appear obese. He carries a Duel Academy-issued Duel Disk on his left hand. Source:http://yugioh.wikia.com/wiki/Chumley_Huffington