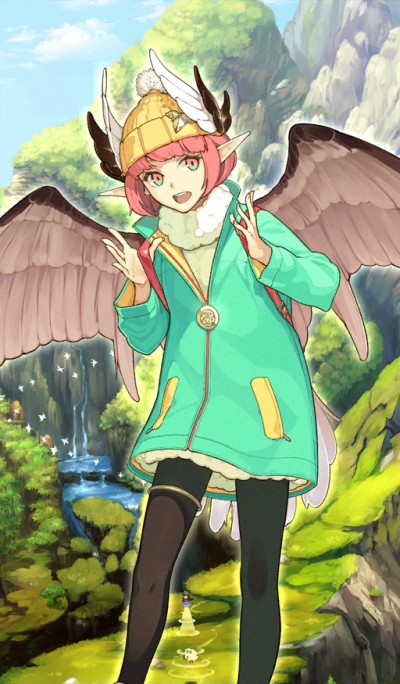 Circe, Class Name Caster, also known as Caster of Okeanos, is a Caster-class Servant summoned by Ritsuka Fujimaru in the Grand Orders of Fate/Grand Order. She is also summoned by an unknown Master "After" the Holy Grail War in Fate/Requiem. Circe is a young woman with long pink hair, blue-green eyes and fair skin. Notably, her ears are pointed, giving her an elf-life appearance. She wears a golden tiara, a light tunic with a short skirt, and gladiator sandals. The reason why, after a certain point of time, she drastically cut her beautiful hair short - which even Homer praised - was due having experienced a severe unrequited love that completely overwhelmed her. The witch of temptation and depravity, famous in mythology. An eternal maiden, with a tendency to fall in love and become deeply jealous. Innocent and pampered, her wiles in caring for another truly has the taste of a forbidden nectar. However, one must be careful about how to refer to her. That is, if you still want to remain a human... Circe dislikes cats, due to her belief that cats take advantage of others with their adorable appearance, along with how cats were involved with something in regards to Medea. She has also shown a dislike for being called "short" or anything that makes her feel older than she wants to feel, such as being referred to as an "aunt" by Asterios. Circe likes to boastfully call herself the Queen of Witches that only worships one deity, Hecate the goddess of witchcraft and necromancy. According to Medea, Robin Hood seems to fit Circe's taste in men. She also showed attraction, as well as hostility, towards Odysseus and his schemes. In Circe's White Day event, she confronts and gets over this.