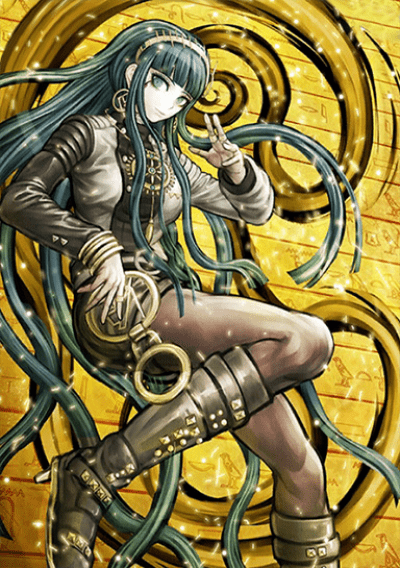 Assassin is an Assassin-class Servant summoned by Ritsuka Fujimaru in the Grand Orders of Fate/Grand Order. In Fate/Grand Order, Cleopatra appears in modern garments such as in leather trousers and a jacket, but this is the embodiment of her maiden power in “displaying her true self in a generally simple way.” When the time comes where she trusts her Master and has deepened their bonds, she will probably display “her appearance in accordance with historical fact” for the first time. Domineering – Extremely S – Kind. Cleopatra's words, deeds and actions are all together unprecedented for a queen. Dashingly, a top lady who lives on coolness. With her utmost nice nature, there are also traits from her that are seen as foolish because of her speeches and conducts further exaggerating it. Recognizing nothing but heavenly beauty. With the exception of that, everything else is to be ruthlessly used. Nevertheless, she does things such as receptions, looking after others, and advising others on their health and anxieties for the future. She loves receptions. She holds self-confidence in her beauty, and declares loudly that almost all things are “beneath me”, but she is also a hard worker who devotes her present self to her studies day after day, just under the point of it being tiresome. Although she usually abuses others, it is not “to act as a fool to others.” It is obvious she is beautiful. It is obvious that except for herself, the others are not beautiful. That being the case, the person herself simply talks about what seems to be obvious, to be an obvious reality, and in her words, she does not contain “unpleasant feelings to the others.” In a public place, Cleopatra behaves arrogantly as a queen, but when it is the individual Cleopatra, that unprecedented style becomes reserved, well-bred and often prudent, and she becomes a cool high-class lady. To say it in a few words, her attributes are domineering, extremely S, and kind. She is kind, despite having sadistic tastes. And although she has sadistic tastes and is extremely sadistic, one cannot conclude that she gets a pleasant feeling in tormenting another person. She does not disparage others for the sake of making herself feel good, but her disposition is merely like that. While she behaves as a queen, Cleopatra's true character is one who discerns decorum, pays attention to the surroundings, and keeps the peace. Even when the delegates of foreign countries arrived, she abuses them first before showing consideration for their health. Usually then she does things such as thanking the delegates with the highest quality of hospitality, etc. Maybe because of that, countless were the delegates who requested audiences, just to be disparaged by Cleopatra, or something. Cleopatra has a bad habit of catching every hardship given that she takes into consideration of performing anything perfectly, her perfectionist temperament being a misfortune. “… Troublesome…” She speaks to herself. Cleopatra comes into contact with the Master with a condescending attitude in a straightforward manner. However, her “attentive attribute” that is the basis of her is fully displayed, paying attention and appearing to spend time with her Master so that he or she is healthy. The wish Cleopatra wants to make on the Holy Grail is to “acknowledge Caesar and their son Caesarion.” Towards the world far and wide, she wants to vigorously announce that her child Caesarion is a child spun from the result of the love between the couple. Cleopatra loves Alexandria, the capital where she was born and raised in, and she deeply respects and adores the great king Iskandar of Macedonia who in addition, became the origin of the Ptolemaic Dynasty and the name of Alexandria. Given that the person herself does not intend to be in low spirits and seriously get mad, Cleopatra is called a “beautiful siren”. As for the person herself, she will only consecrate her love, similar to getting fired up, towards men who will surely protect her country for her, while simultaneously, endeavouring himself for the sake of defending the city of Alexander and her beloved native land of Egypt; with that sort of intention, she is by no means a siren.