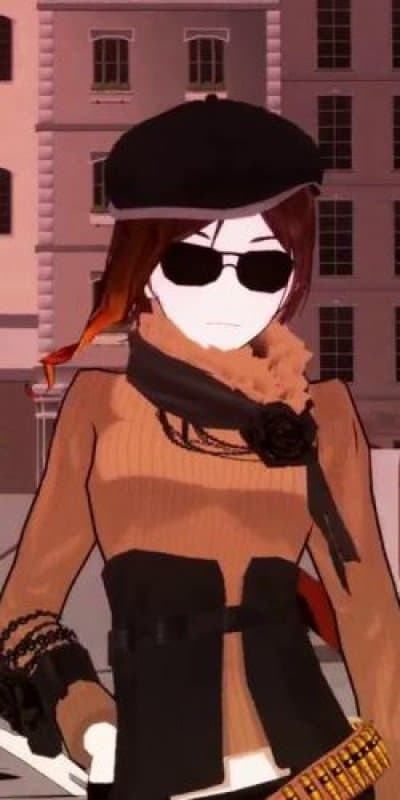 Coco Adel is a former student at Beacon Academy and the leader of Team CFVY. Her weapon of choice is Gianduja, a handbag that can transform into a rotary cannon. She is first seen in "Field Trip", after returning from fighting the Grimm. Following the Fall of Beacon, Coco and her team transfer to Shade Academy. Coco is a teenage girl with fair skin, short dark-brown hair, and dark-brown eyes. She has wavy locks on one side of her face, dyed with a gradient that starts as dark brown and transitions to caramel. Her clothes consist of a long, cocoa-colored shirt with an upturned layered frill collar with a black single strapped waist cincher. She wears tight black leather trousers that have golden lining around the pocket and ribbons attached to the back of a golden zipper seam around her knees. A black golden studded belt is normally hidden by a large cocoa-colored belt with gun cartridges on the left side and a large golden crosshair buckle. A large piece of black fabric is attached to her belt hanging down on her right side. She wears a pair of dark black, high-heeled leather calf-high boots with golden buckles. Coco also dons a number of accessories, such as a bracelet with black roses as decoration; these are accompanied by black gloves and three beaded necklaces alongside a black scarf tied around her collar. She wears a black beret with a cocoa brown trim and a pair of black, wire-rimmed aviator sunglasses. She is seen holding a black shoulder bag with gold studs, which is held by a bandolier strap; the bag is her weapon, Gianduja, transforming into an oversized black and gold minigun. In RWBY: Before the Dawn, Coco's sunglasses are upgraded by Velvet Scarlatina with night vision and scoping technology. Coco refers to this tech as "BunnyVision". Coco appears to be very confident: her self-assurance is expressed in the very way she struts through the battlefield. Her experience with Grimm has been consistent enough that their appearance no longer fazes her. Coco is confident enough in her team that she holds Velvet back from combat when she tries to unleash her weapon. She is also seen slapping Fox Alistair on his bottom as she compliments his performance. Her confidence is later seen once more in "Lessons Learned" when she states that she likes Emerald Sustrai after her initial taunting of her. There is also a touch of sportsmanship and open-mindedness in showing appreciation for Emerald despite being opponents who sass each other. She claims to love a challenge and being first in things. However, the confident, self-assured way Coco carries herself can be disrupted. This is first seen during the episode "Lessons Learned" when her hands began trembling after realizing she saw Yatsuhashi Daichi when he was not actually there. Additionally, Coco contemplates the definition of being a leader, looking to others, such as Ozpin or Glynda Goodwitch, as examples of what good leadership means. Originally, Coco was a very individualistic person, but her time in Beacon taught her to trust and lean on her team for support. Still, she was fairly self-centered in Vacuo, something which angered Velvet at times. Over time, this self-centeredness evolved into a protective nature of her team, defending them from even those who she admires, such as when she defended Velvet from Xanthe Rumpole. Coco's three favorite things are fashion, explosions, and killing Grimm, thus joining Beacon Academy allowed her to combine all three. Given her attire and her reaction to both the Grimm's destruction of her "favorite clothing store" and her sunglasses getting damaged in the course of her duel with Emerald, fashion is strongly integrated into her personality. Coco has a habit of using the cover provided by her sunglasses to discreetly evaluate other people. They also mask her own reactions to things. Despite being easily distracted by attractive women, Coco has shown the ability to move on and refocus on the task at hand quickly. She understands that physical appearance is not a person's most important attribute. Instead, character and ability are more valuable traits to her when selecting a romantic or combat partner. She has claustrophobia due to a childhood incident where she got stuck in a cupboard during a game of hide-and-seek. Following Team CFVY's mission at Lower Cairn, Coco had been off her game, being slightly less capable than usual due to the traumatic incident. By RWBY: Before the Dawn, Coco's leadership is shown to have immensely improved since the events of the Fall of Beacon and RWBY: After the Fall, now taking her teammates into consideration at every turn, noting how other people had an impact on them whether they realized or not. She is also shown to be demanding of her team, willing to go through with her plans despite her team protesting against them, and is judgmental of other people's leaders. Furthermore, she looks up to great Huntresses such as Rumpole or Glynda Goodwitch as role models for herself. Nonetheless, Coco's biggest flaw is the belief that she is perfect or close to it, making her stuck up and judgmental.