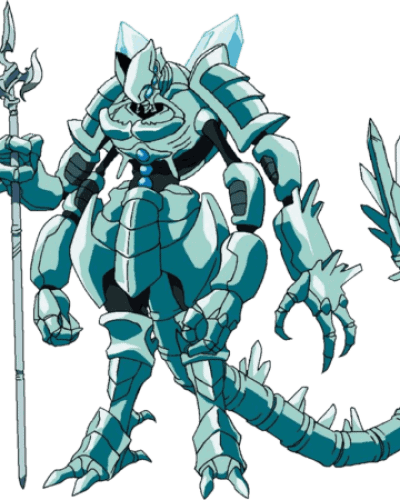 Cocytus is a Floor Guardian of the 5th Floor in the Great Tomb of Nazarick. He is the creation of Warrior Takemikazuchi. Having an enormous body size of 2.5 meters, Cocytus has the appearance of an insect walking on two feet - a fusion between a mantis and an ant. With a tail twice as long as his height, Cocytus is covered in sharp spikes like icicles and has a strong jaw that can easily snap people's hands. Two of his hands hold a silver halberd, while the remaining two hands hold a mace emitting black light and a crooked shape sheath which seems to be for a broadsword. With a breathtaking cold air, the pale blue, hardened bone armor oozes out diamond dust like bright light. His shoulders and back look like uplifted icebergs. Cocytus has a warrior personality, respecting anyone with a fighting spirit, and the heart of a warrior. As a Floor Guardian, he is in charge of Nazarick's martial defense. Cocytus is loyal to a fault that he even allows his master to fight the rebel Shalltear alone as the former was ordered to do. This is shown when he prevented Demiurge, under Ainz's order, from interfering in Ainz's fight against Shalltear, even though he too also feared the possibility of losing his master. As Cocytus is a warrior by heart, he likes a good battle and has a sense of honor. He is not above the thought of condescending his opponents, but rather show admiration of their tenacity to fight. Unlike his isolationist and xenophobic colleagues, he is more accepting and open to the idea of allowing outsiders like the lizardmen to join Nazarick. He also appears to enjoy watching how battles play out as a bystander, excited to see what tactics and strategies his enemy use. Though Cocytus takes pride in his position as Nazarick's defender, he is somewhat envious of his fellow Floor Guardians. Cocytus likens himself as the 'sword' of Ainz Ooal Gown, that executes his master's wishes. He thinks the only way he could prove his worth to Ainz is by actually defeating the invading forces that would pose a threat to Nazarick. Cocytus is not fond of asking for assistance in order to save face, but when the need arises, he will put his pride aside to accomplish his task. For that reason, he was willing to accept a personal defeat but not one that will disgrace and humiliate the Great Tomb of Nazarick and the 41 Supreme Beings. After losing his army to the lizardmen, he starts to reflect more on his actions and no longer wishing to obey his master's order blindly without first offering his own input on it. With the task of now administering the Lizardman Village, he has also began to shoulder more responsibilities that were expected him to carry out by his master. Knowing his defeat, Cocytus doesn't mind if his master reprimands him. He was tolerant about it to the point that he had already prepared himself to be slain if given the order to do so. In other words, Cocytus was ready to commit suicide in order to erase the stain of his dishonor for losing to the enemy. What Cocytus felt most afraid of is the notion that he could possibly disappoint his master and be abandoned because of it. He was sensitive of his failure having an affect on the rest of his fellow NPCs that his death alone will not be enough to atone. Cocytus failing his first campaign put a mental toll on his state of mind where he tried his best to console himself from seeing such a scenario happen. When seeing Ainz go out of his way to do tasks still, Cocytus can't help but sometimes also feel sadly inadequate and incompetent as he himself couldn't be able to fulfill the work in his master's stead. He is also a person who is diligent with whatever task was given to him such as training either alone, with Ainz or with the lizardmen in swordsmanship. Ever since the end of the Lizardmen War, he has become a teacher-like figure to the lizardmen, strictly teaching them to abide by the rules of Nazarick and how they respectfully act around Ainz. This causes Cocytus to become a more outspoken person about the decisions he needs to wisely and carefully choose as Ainz wishes him to think of ways in bettering Nazarick. As a result, he starts to develop confidence and trust in his judgement of what to do rationally during wars. Cocytus yearns for Ainz to produce an heir for Nazarick, to which he could look after and train under him. He was willing to train either Ainz or his future child about direct combat physically and how to approach these kind of foes. Based on his conversation with Shalltear, he fondly enjoys the idea of honing and crossing blades with his master in the ways of swordsmanship if permitted the chance to duel him. He takes thrill in dueling worthy warriors who caught his attention, looking to challenge their resolve head on and even possibly, recruit them if a chance presents itself.