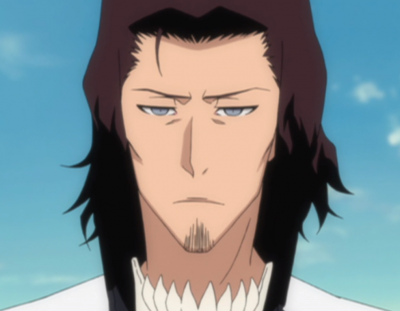 Coyote Starrk (コヨーテ・スターク, Koyōte Sutāku) is an Arrancar and the Primera (1st) Espada in Sōsuke Aizen's army, along with his other half, Lilynette Gingerbuck. Appearance Starrk has blue-gray eyes and wavy, dark brown hair, which ends at the base of his neck, is always unkempt, and is parted down the middle. He has a faded goatee. His clothing is typical of an Arrancar: he wears a white jacket outlined in black, though altered with the collar upturned. A black sash is worn in a manner similar to a matador around his waist and he wears white gloves. The remains of his Hollow mask consist of a fanged bottom jaw which is positioned along his neck. His Hollow hole is on his sternum, right below the tip of his mask. His Espada tattoo is featured on the back of his left hand, which is usually hidden underneath his gloves. Personality Starrk is a lazy and unenthusiastic man who spends much of his time asleep, and no one, except Lilynette Gingerbuck, his other half, appears to try and stop him from doing so.[4] Despite being the highest-ranking Espada, he is not eager to take a leadership role, allowing Baraggan Louisenbairn to take over at the battle of the Fake Karakura Town.[5] He is not particularly interested in whatever is going on around him, though he is observant and a capable analyst. Unlike many of the Espada, he is not inherently violent or overly arrogant Starrk often ends up in situations with him on the receiving end of physical abuse from his partner Lilynette, even though he does little to stop her actions. He can be serious on occasion, although his personality does not change much: he comes off as reluctant, but nonetheless willing to complete the task at hand.