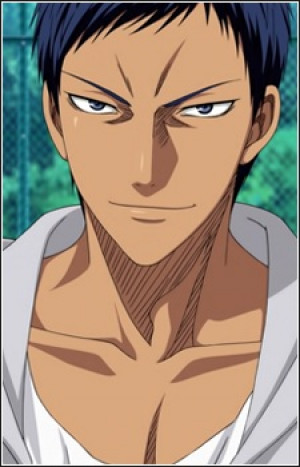 Daiki Aomine was the ace player of the renowned Generation of Miracles and was the former partner/light of Kuroko in Teikō. He currently plays as the ace and power forward of Tōō Academy. He and Kagami are sworn rivals after their clashes in the Interhigh preliminaries and in the Winter Cup. He was the main antagonist until the first round of the Winter Cup. Aomine's brown skin is darker than most of the other characters. He has navy blue hair that is quite short. His hair is parted on his right side. He often has a frown on his face, with his dark blue eyes slightly squinted. Aomine is very tall and muscular. He stands slightly taller than Kagami taiga. He wears the black and red Tōō High jersey with the number 5. His casual summer clothes consist of a loose, white tank top and tan cargo pants. In the winter, Aomine is often seen with a light woolen shirt, a black hoodie and a dark bodywarmer. Before he gained immeasurable strength, Aomine was outgoing and even friendly. He often fooled around with Kuroko and Kise. Momoi stated that the old Aomine was very similar to Kagami; he loved playing basketball and was very good at it too. However, he kept training and getting stronger, to the point that he often completely crushed his opponents' will to play basketball. He was initially sad about this, and searched for his equal on the court, but he never found one. Eventually, he came to the conclusion that he is simply the strongest and that "The only one who can beat me, is me". He also cast his feelings towards his opponents aside and now views them as weak and wants to crush them. He often seeks to humiliate them in the worst kind of fashion. He has also become very lazy, only coming to training when he wants to, and slacking off even during matches, sometimes abusing his teammates in the process, because he became bored and overall desensitized. Aomine also has a short temper and some kind of admiration towards Kuroko even after his "change", as he threatened a Tōō player with physical violence when he badmouthed Kuroko (likely in ode to their old friendship). Also, when Haizaki stole food from Kuroko, Aomine told him, irritated, to get his own. He is also a big fan of Japanese idols. He appears to be interested in that field of entertainment and knows about many idols. He has also said he likes models with big chests. Aomine is shown to be very protective of his former teammates in Teikō Junior High, something his current teammates in Tōō Academy refer to as Aomine's "soft side". This was first shown when Aomine attacked one of his teammates in Tōō after he badmouthed Kuroko's style of play. This side of his personality while still subtle, started to grow more after his first ever loss against Seirin/Kagami and Kuroko. After Kise's match against Shōgo Haizaki ended, Aomine confronted Haizaki in order to make sure he did not recklessly attack Kise later on or get in the way of Kise's and Kuroko's match at the Winter Cup. Via his very first loss, Aomine's old personality traits started to show slightly, while still remaining rather hardened at his continuous wins in the past. As a result, he started to train a bit more often as well as for the first time, feeling heated enough to want to play basketball again and not being able to sleep over it. And while he didn't show it as much, he started to develop more trust in his own teammates, both former and current.