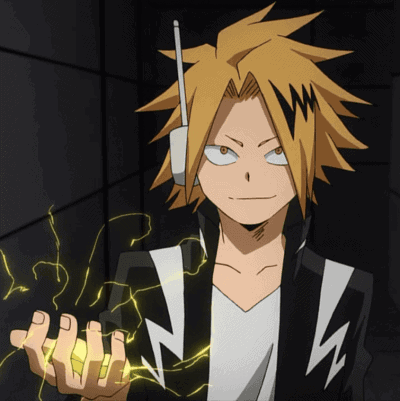 Denki Kaminari, also known as Stun Gun Hero: Chargebolt, is a student in Class 1-A at U.A. High School, training to become a Pro Hero. Denki has short gold hair, parted to the right with a black lightning-shaped streak on the left of his side fringe, which is angled so that it partially obscures his left eye. He has slanted, somewhat triangular golden eyes, and notably small eyebrows. He's slimmer than most of the other male students in his class, not having much visible muscle mass. He gained a scar on his upper left forehead following his injury from Mr. Compress' attack. He wears the normal U.A. uniform during school hours, the second button of his blazer undone. He also wears dark brown shoes. In his original hero costume, he wears a plain white shirt, over which he wears an open black jacket with a white lightning pattern across his back, and matching pants with two lines running down his legs. He has a single, square-shaped earphone over his right ear, something resembling a radio antenna sticking out of the top. His updated hero costume consists of a slightly shorter black jacket with fewer white patterns, only two near the hem and collar, and a yellow rimmed lightning bolt going around each of his shoulders. He still wears matching black pants, but they only have a small zig-zag near each of their cuffs, and he wears a belt and a white V-neck shirt. Around his right wrist, he wears a wristband with a circular mechanism from which he can shoot disc-shaped Pointers which aid him in aiming his Quirk. Along with that, he wears a black choker with a silver buckle on the left side and a headset with a blue-tinted visor. Denki is a friendly, social, and energetic boy who likes to hang out with people. He is rather casual when interacting with others, including the generally unfriendly Katsuki Bakugo, although he's also not above petty complaining or overreacting if feeling annoyed or shocked enough. Denki may come off as blunt and reckless at times, but is always well-meaning. Denki is somewhat flirtatious towards the girls of his class (and even the ones from other classes), sometimes accompanying Minoru Mineta on his schemes and trying to pass himself off as a smooth talker. He is not very lucky with his approaches, though, frequently having his advances ignored or outright rejected by everyone he asks out. Denki is also a bit of a jokester and likes to tease others with playful comments. Overall, it seems that Denki has an interest in appearing cool and trendy in order to impress people, but has a shallow understanding of how to do so properly. Because of that, he gets easily influenced by what's popular or stylish at the moment, even if it's due to villain action. Denki is not very academically bright, requiring massive help at studying due to his general disinterest and neglect of school duties. He does not appear to pay much attention in classes, gets easily bored from lectures, and suffers anxiety attacks when dealing with tests, at which point he becomes increasingly agitated and aggressive. Frequently showing a lack of tact and smarts in and outside school, Denki may give off the impression of being stupid or foolish, leading others to throw snide remarks at him (especially Kyoka Jiro) or underestimate his capabilities as a hero. Despite this, Denki can show surprising knowledge about certain areas such as literature, art, and music, possessing a large vocabulary that shows up every now and then. Denki becomes quickly distraught when put into stressful situations, to the point of appearing spineless and incompetent to foes and allies alike. During combat, he is very quick to panic and may accidentally activate his Quirk in the face of any imminent danger, leaving himself vulnerable in the process. He becomes more reluctant to use his full power when there are allies close to him, being afraid of hurting them through collateral damage from his volatile bolts. When he is assured that all his allies will be safe from his powers, he becomes more confident in his fighting abilities. He does not tolerate others looking down on him or his classmates and will defend them if necessary. Whenever Denki exceeds his wattage limit, he loses his ability to discharge energy, with his entire personality changing into that of a giggling idiot for a certain period until he reverts back to normal. In this state, he is always giving thumbs-ups, as a way to let others know that he is fine.