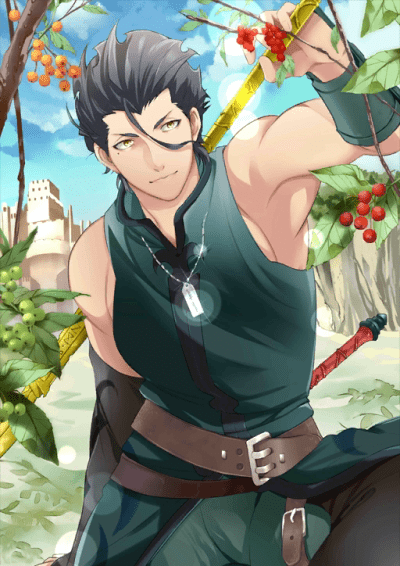 Diarmuid Ua Duibhne, Class Name Lancer, is the Lancer-class Servant of Kayneth El-Melloi Archibald in the Fourth Holy Grail War of Fate/Zero. He is a chivalrous servant who wishes to do his best to serve his Master and obtain victory within the war for the Grail. He shares a bond of mutual respect with rival Servant Artoria, wishing to face her in an honorable duel to the death. He is one of the Servants summoned by Ritsuka Fujimaru in the Grand Orders of Fate/Grand Order. Diarmuid is regarded as a remarkably handsome young man with quirky long hair combed backward in a rough fashion that has a strand hanging down his face. He wears a dark teal outfit, similar to that of Cú Chulainn's. due to their shared Celtic mythology. Irisviel instantly notes that his features are capable of sweeping a woman's heart at a glance. It is described that the bold features of his face are the high bridge of his nose and his valiant eyebrow. His hard cut mouth marks him with a stoic air, but his eyes seem make his gaze even more brilliant. Takeuchi considers his charm point to be his droopy eyes and button of a mouth. He has a strong, attractive manly scent that rises from him. She soon realizes his elegant air of beauty is somewhat unnatural. Even though his features are considered handsome, much of it comes from his spiritual power charming women due to the curse of his beauty spot. Diarmuid is an extremely proud and noble knight who wishes to serve his lord to the best of his abilities. The geis laid upon him by Gráinne was taken by Diarmuid as a test of his pride. He never once blamed her for forcing it upon him, and he truly admired her ability to throw away her pride, title, and future for the sake of her love. He was constantly distressed by the fact that he betrayed his lord, and even as he died while Fionn did nothing, he did not blame his lord for his actions. Diarmuid believed that despite the cruel twist of fate that led him down this path, the days spent with his lord and his love were used to the fullest. Diarmuid sees the Grail War as a miracle that will allow him to regain his pride as a knight by fighting noble battles and delivering the Grail to his Master. He sees no use in wishing upon the Grail, as simply being summoned has already half-fulfilled his greatest desire. If Diarmuid appreciated Kayneth's talents and experience, then Kayneth would have treated him with a much softer attitude. To Diarmuid's disappointment, Kayneth doesn't believe him in the slightest and constantly looks down on his pride as a knight. He constantly berates Diarmuid, believing that Diarmuid plans to betray him and take his fiancee, Sola-Ui Nuada-Re Sophia-Ri, by using his magical spot. He is also a coward who constantly make demands that would have Diarmuid betray his code and win by all cost. Despite his Master's distrust and lack of character, Diarmuid remains extremely loyal, though he fears that Sola-Ui's attraction to him will eventually cause him to betray his Master once more. He happens to be a submissive man as he constantly took abuse from his Master while offering little resistance to stop it. Diarmuid adheres strictly to the codes of chivalry and upholds his pride as a knight to the fullest, steadfastly believing in honor during battle. While being pursued by the knights of Fionn, he refused to fight against his former comrades. Despite having been presented with several chances to kill either Artoria and Kiritsugu, he refuses to do so due to the circumstances with which he can do so are against his code. During his battles with Saber, he attempts to provide for the fairest conditions possible. His code and pride also forbids him to ignore evil. During the Caster crisis, he even goes as far as to fight alongside Saber, acting as her "left hand", after she suffers the crippling wound from Gáe Buidhe in order to be able to face her in battle again in the future. He is willing to go so far as to destroy Gae Buidhe, so as to allow Saber to use her Noble Phantasm to destroy Caster, simply because Caster himself is a great evil that has to be wiped out, despite the fact that he himself has nothing to gain from it.