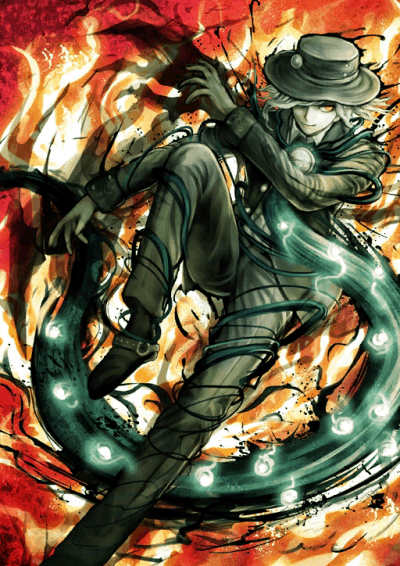 Edmond Dantès, Class Name Avenger, is an Avenger-class Servant summoned by Ritsuka Fujimaru in the Grand Orders of Fate/Grand Order. While his True Name is Edmond Dantès, Avenger perceives himself to be a different person from the seaman from Marseille. While in life he had abandoned his dark nature at the end of his gruesome and tragic revenge in Paris, his powerful and vengeful Monte Cristo persona has manifested as a Servant and is still acting as the "image of a nemesis", so he claims, "In that case, I am not Edmond." Therefore, he will never introduce himself as Edmond Dantès. His catchphrase is "Wait and Hope" (in French, "Attendre, Esperer"), which is a direct quotation from the ending of The Count of Monte Cristo in his farewell letter to his friend Maximilien Morrel. An avenger to fate and reality. Avenger always hates the irrationality and malice that is all over the world. At a first glance, it appears that his hatred is projected towards the whole world except on himself, but he is never a demon that hates innocent people. He hates and continues to deny reality itself that continues to reign while it is still full of atrocities and immoralities. Avenger defines himself as a “demon of eternal vengeance”. He is full of roughness and violence, hurting every person who approaches him, but... To the Master who do battle to rescue human history from incineration, Avenger has two forms to select from. Namely, the form as “himself that trifles with reality and a vicious fate (Edmond Dantès)“ representing his current self, and the form as “a person that is close to who he was before (King of the Cavern) as the materialized idol of hatred.” Particularly regarding the latter form, before long, Avenger will surely recognize the profile of his Master who continues to struggle, seemingly at first remembering Haydée, the princess of a ruined country, or Abbe Faria, who was his benefactor. Of course, Avenger himself in this form does not represent his current self. The Master who walks together with him is just one person in his past, present and future. Even though, the others should not be here. If that is the case, the feelings embraced then is also the sole thing that must be there in the past, and not here in the present. According to Shiki Ryougi, Edmond Dantès is the kind of person who one victory against him is enough for him to become an unexpectedly trustworthy ally, as only someone with great love and care would turn into such an Avenger after being betrayed by someone they love. That also means that Edmond loves humanity on a very fundamental level. If Angra Mainyu, born of hatred, is an avenger that speaks about love, the King of the Cavern, born of love, is an avenger that speaks about hatred. Where one forgives and accepts evil as a inherent part of humanity, the other rages and strikes at it with vengeance.