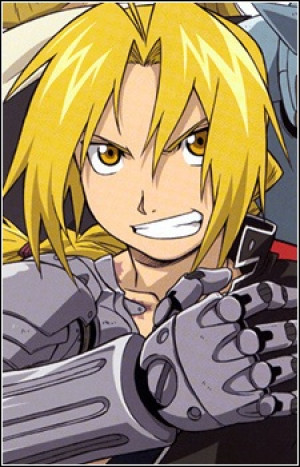 Edward Elric , also known as Ed or the Fullmetal Alchemist, is the titular protagonist of the Fullmetal Alchemist series. After losing his right arm and left leg due to a failed Human Transmutation attempt, Ed became the youngest State Alchemist in history by achieving his certification at age twelve. Three years later, Ed has become fully engrossed in his search for the legendary Philosopher's Stone, an item with which he hopes to restore his younger brother Alphonse Elric, whose whole body had been lost in the aftermath of the human transmutation. Edward is small for his age, standing at only 149 cm (4'11") at the beginning of the series, despite his attempts to appear taller, (due to the notation that he cannot stand regular milk). He wears his golden-blond hair long - usually tied in a braid that hangs down to his shoulders, but sometimes forgoing the braid for a simpler ponytail. He parts his bangs in the middle so that they frame his face on either side as they fall and, in the center of the parting, he leaves a single strand of hair sticking up like an antenna. In Chapter 56, it is revealed that he does this intentionally, presumably to add to his height. Ed's eyes, too, are gold, signifying his Xerxesian ancestry. It is revealed in one of the Fullmetal Alchemist art books that the reason why Edward wears all black is to hide any oil stains that he may obtain from his automail. Early on in the manga, Ed receives a thin, horizontal battle scar just above his right eye, which remains because his subsequent battles cause the sensitive skin to tear open repeatedly. As of Chapter 76, however, the scar appears to have healed over completely. As the series progresses, some of Edward's facial features (his nose and chin) begin to take on characteristics similar to his father's. At the end of the series, Edward is shown to have grown noticeably taller, being several inches taller than Winry and finally being at least equal in height to Alphonse. Near the end of the 2003 anime series, it is revealed that the Earth has its own version of Edward Elric, who is identical to that of the storyline save for having his hair and bangs cut short. As a result of his alchemical dismemberment, Edward was fitted with full steel automail prosthetics custom crafted by Winry and Pinako Rockbell. His left leg from just above the knee down is automail and his automail right arm reaches all the way up to his shoulder; both are designed so that their outer shells resemble modernized plate mail. In the manga and 2009 anime series, after Edward travels to the northern area, he is refitted with new, cold-climate type automail limbs. Designed to be rich in carbon to prevent frost damage and lighter to help Edward's movement, they are both significantly thinner than his previous models and even appear more lustrous, with a more prominent silver tint than the old steel versions. At the end of the series, Edward keeps his automail leg and the scars from the installation of his arm remain indefinitely on his right shoulder. In Conqueror of Shamballa, Edward is fitted with a gas-powered automail arm by Hohenheim for use on Earth, where automail does not exist. It is coated with a thin, skin-colored film so as to blend in with the rest of his body, but when the gas motor is activated - allowing Ed greater power and motion with his arm - the heat from the exhaust melts the coating, revealing the mechanical plating underneath. Ed wears as his trademark a bright red, long-sleeved, hooded cloak whose tail comes down to his upper calves. Emblazoned in black on the back is a Flamel, signifying his tutelage under the master alchemist Izumi Curtis. It is likely that Edward fashioned this cloak for himself, as he needs to repair it often and, in Chapter 85, transmuted one from scratch using a roll of red cloth. During the Elric Brothers' trip to the northern area, Ed's cloak was modified somewhat with a white fur trim around the hood to accommodate comfortable passage through cold conditions. Though Ed's clothes vary over the course of the series, he seems particularly partial to black and will nearly always dress in black trousers and some sort of black shirt under his coat. In his usual outfit, Ed primarily wears a sleeveless black shirt with a black jacket that has silver/white lining along the edges, along with a red trenchcoat-type jacket. This is his main outfit, and over the course of the manga and 2003 Anime, the jacket undergoes multiple changes. This is seen at the beginning of the manga and 2003 anime where the jacket is longer and is tucked into his belt. However, when he first leaves Resembool, it hangs over his belt and has a zipper on top. The most common version portrays the jacket being connected at the top with a button, and falling slightly short of waist-length, making it possible to see his black shirt. He also wears a wide brown leather belt to which he keeps his silver State Alchemist pocket watch affixed. In the 2003 anime, this belt is instead changed to two thin belts worn parallel to each other. As part of his attempts to seem taller, Edward is rarely seen without his elevator shoes - black leather boots with thick, red soles. Additionally, he frequently wears white gloves when in public to conceal the fact that his right arm is artificial. It is likely that his general outfit is meant to convey a red, black, and white motif, as these three colors (as well as the gold color of his hair and eyes) are considered significant in traditional alchemy.