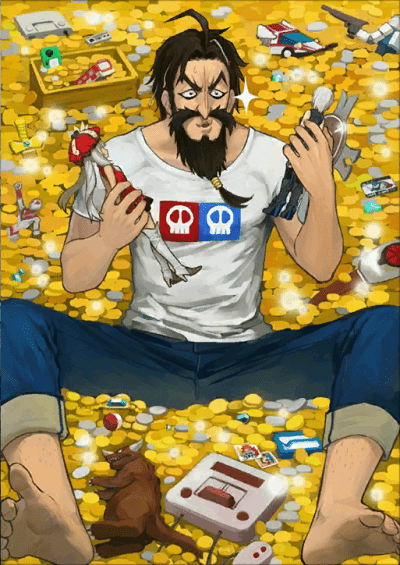 Edward Teach, Class Name Rider, is a Rider-class Servant summoned by Ritsuka Fujimaru in the Grand Orders of Fate/Grand Order. Blackbeard is now a splendid all-round otaku. While he can be violent towards his subordinates without warning, he also possesses the bravery to savagely charge at a forest of swords and rain of bullets. Truly the one who comes to mind when it comes to pirates. Stealing, killing, plundering; the great pirate that had once put the Caribbean Sea under his control. Blackbeard does love his share of alcohol, gold, woman, and violence; but his traits as a pirate, too, are intense. The man befitting to be called a pirate-like pirate. He is thoroughly and severely harsh to adults, but he makes exception for children who admires him. He would not wield violence against them. ...is how Blackbeard is on the outside. But the fact is that he is, in a certain sense, someone at the deepest depth who is probably beyond redemption. Always fooling around, unchanging from when he was still alive. He does not kill people in anger; instead, he is capable of killing them while laughing or even killing them as he plays a trick on them. He is more about searching for pleasure instead of being cruel. If he could enjoy himself in any situation, then it's all good. He had had many women, but since each and every one of them are greedy women who's eyes aim for treasures, Teach himself does not think that that harem as something fulfilling in a real way. True love. Blackbeard, who had become a Servant, believes that such a thing only exists in the sea of internet. He takes a "more or less" respectful attitude towards the master, but generally, he would immediately just ignore the Master's plan and begin to use the Holy Grail War for amusing himself to his heart's content. If one is not of the same nature as him, then he will not follow their instruction. If one does not possess the same alignment (fetish) as his, he would relatively be unable to get along with them.