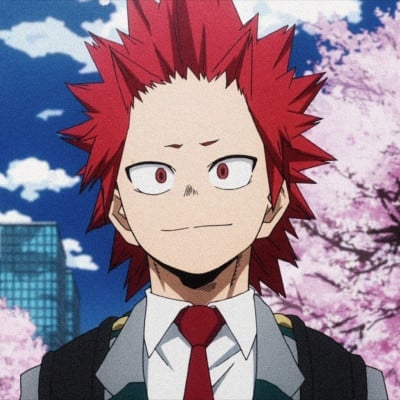 Eijiro Kirishima, also known as the Sturdy Hero: Red Riot, is a student in Class 1-A at U.A. High School, training to become a Pro Hero. Eijiro is a muscular young man of average height and a rather impressive physique for his young age. He has red eyes that are pointed slightly inwards and a small scar just above his right eye, which Horikoshi admits he frequently forgets to draw. He also has small eyebrows and pointed teeth. His hair is somewhat long, dyed a bright red, and spiked away from his head at all angles with gel, two more pronounced tufts spiked on either side of his forehead like little horns. This lofty style takes a full three minutes to set. During middle school, however, his hair was black and left in its natural state: just under shoulder-length with some shorter bangs between his eyes. He changed it to his current style shortly after being accepted into U.A. High. During school, he wears the normal U.A. uniform, just with dark red trainers instead of the usual brown dress shoes. In his hero costume, he wears two dark red gear-shaped shoulder pads. A jagged sash joins the one on his left to the right side of his belt, which has a red “R” set into its center, standing for his Hero name, “Red Riot”. Below this, he wears baggy black pants and half cape with a ripped hem. He also sports dark red boots and multiple thick rings going around his calves. He leaves his chest bare, and wears a wired guard around his face, reaching from just above his hairline to below his jaw, an extra piece going over the bridge of his nose, and some spiked pieces around his mouth which resemble little fangs. This look overall slightly resembles an Oni, which is a troll-like creature commonly seen in Japanese folklore, but whether this was purposeful or not hasn’t been confirmed. During the Provisional Hero License Exam Arc, his costume later gained black sleeves, which he wears to prevent civilians from being hurt by his Quirk during rescues. Eijiro is a boisterous and outgoing guy with a fondness for the concept of manliness, often using the terms "manly" and "unmanly" to describe things and people he does or doesn't like, respectively. Those who showcase a noble, brave, and/or determined attitude tend to emotionally move him to tears, quickly earning his complete admiration, respect, and friendship. Similarly, he will call out traits that are the opposite of that, such as cowardice and dirty play. Eijiro himself is determined and selfless, bravely putting the safety of others before himself. He is also a big fan of Crimson Riot, a retro hero that he takes inspiration from, including personal values and his own hero name. Eijiro is very honest and kind-hearted, having a straightforward way of thinking and following a specific code of chivalry that motivates him to live without regret. Thanks to his respectful and encouraging attitude, he's easily capable of making friends with most people he encounters, particularly those that show as much passion and resolve as he does. Loyal and dedicated to his friends, Eijiro is willing to break laws and rules in order to help or save them, becoming regretful if he becomes unable to come for their aid. Eijiro has a strong sense of responsibility, sometimes being very hard on himself for any negative outcomes that befall him or his friends. As such, he's always thinking on how to further improve his own abilities and strengths, so as to not feel weak or burdensome to others. Eijiro has stated more than once that he does not think very highly of his own Hardening Quirk, thinking that it lacks the flashiness usually found in the Pro Hero scene. In fact, he will get downright offended if he finds someone with a similar Quirk. Eijiro also has concerns about not having a good enough Quirk for hero work, worried that his skills could not compare to other hero prospects. A lot of this self-doubt seems to have come from an incident in Junior High when Eijiro saw Mina Ashido stop an underclassman from being bullied and save some students from a threatening figure. Eijiro's friends pointed out that Mina will easily become a Hero due to her outgoing personality and athletic nature. After this, Eijiro thought of himself as dull and boring, considering himself pathetic for his inaction and powerlessness, but thanks to an old, recorded interview featuring his idol, Eijiro was able to get the perspective he needed to regain his composure and overcome most of his insecurities. From that point on, Eijiro started working, studying, and training diligently. Eijiro decided to reinvent himself after being accepted into U.A. High, adopting a tough, confident, fiery persona that he considers ideal to the kind of hero he wants to be. Although Eijiro may not be as hot-blooded and competitive as Katsuki Bakugo, he does not shy away from comparing himself to him, with Izuku stating that the two have managed to develop a relationship between equals. As a result, Eijiro is notably one of the few people that Katsuki holds in higher esteem.