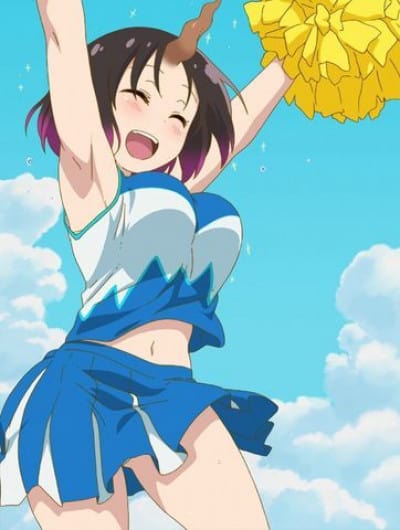 Elma is one of supporting characters in the series Miss Kobayashi's Dragon Maid and the main protagonist of Miss Kobayashi's Dragon Maid: Elma's Office Lady Diary. She is a female dragon from the Dragon Faction of Harmony, the opposing faction of Chaos (which Tohru belongs to). She adopts the name Elma Joui as her human alias after she finds that she is unable to return to the dragon world. Elma usually takes the form of a human woman with short black hair (which was originally much longer back when she still lived in the other world), large breasts, blue eyes, and a long spiral unicorn-like horn (which she can freely hide). In the anime and Elma OL Nikki, her hair also has purple tips. At work, she wears round glasses. She also wears a business suit which consists of a white shirt, light blue tie, a loose blue sweater, a grey blazer, and a dark grey knee-length skirt with light grey socks and black heels. Her casual attire in the anime consists of olive-green skin-tight trousers, a light blue jacket, a dark blue vest, and a yellow scarf. Elma's first outfit, which she also wears in her world while in human form, consists of a light tan scarf with a dark blue (sometimes black) leotard. She wears a purple kimono with pink piping, and a dark blue sash over the leotard, with the top pulled down. She has bandages around her legs and sandals. She can be seen with a cobalt blue and turquoise tail (which she can freely hide). Sometimes, she carries around a long, brown trident. In her dragon form, Elma is a blue sea serpent with a brown horn protruding from her forehead, and her brown trident is her tail. She can freely move around in water due to being a water dragon. As evidenced in the manga and anime, Elma is very persistent in that she tries to bring Tohru back to the other world, despite the latter voicing her opinion that she'd rather stay peaceful living with Kobayashi. Even after getting sent to another continent, her persistence shows as she stomps up to Tohru and demands that the other dragon go back to the other world, to which she is then baited off with a bag of cream bread. Also, despite being just as strong as Tohru, she has admitted that she cannot travel between worlds due to being "born differently." Elma is also very indecisive, as shown in the anime where she struggles to pick one specific food combo, an ice cream combo, and finally to which kind of toothpaste to use. Elma's most defining personality trait is her gluttonous appetite. Elma has a sweet tooth of sorts, having shown her love of food of all kinds from the cream bread (where she states in the English dub of the anime that she just ate heaven), to after her first day of work, where Kobayashi gives her a piece of hashbrown, in which she screams "YUMMY!!!" afterward, to where she impulsively buys a bag of waffles in episode 13. Because of this side of her, Elma can easily be tempted when presented with food. She is even willing to sometimes go against certain rules by the Harmony Faction despite being a well known member. In some instances her gluttonous appetite is depicted as a borderline addiction, showing instances where she states that she can't even help herself, and that she must eat (until she runs out of savings)