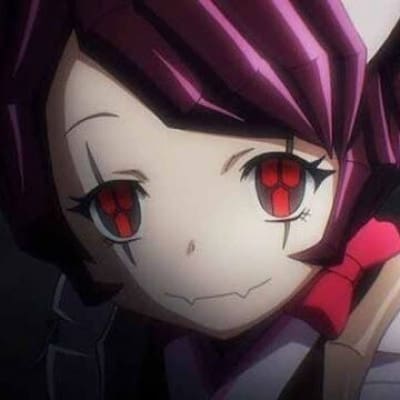 Entoma Vasilissa Zeta is an arachnid battle maid and a member of the "Pleiades Six Stars," the battle maid squad of the Great Tomb of Nazarick. She was created by Genjiro. Usually, Entoma seems to have the appearance of a young girl wearing traditional Japanese attire. She has bright red eyes that never move or blink. She has mauve hair with twin chignons. She never exposes any bare skin except for her "face." Her true form is that of an arachnoid, a spider-human hybrid. What acts as her "face" when disguised as a human, is actually an insect in the shape of a mask of a human face. Her hair seems to be rolled centipedes. Though she clearly appears inhuman in her novel illustrations, no one appears to notice her disguise and do not realize she isn't human till she takes her mask off. She also disguises her voice as that of a young girl by using a leech that can steal the voices of its victims. It is unclear if the victim must be a human. Her own voice is harsh and grating, similar to that of Cocytus. Currently, she is using the voice of Arche Eeb Rile Furt. Entoma likes to eat humans. Though she does not mind what kind of person she eats, her favorite part of a human happens to be the muscular arms of men. If there are no humans to eat, she eats snacks called "green biscuits" instead. She also tends to eat the insects inside the Black Capsule. Despite treating humans as food, Entoma's nature is not considered extremely evil. If she comes across humans when she is sated and they do not bother her, she will ignore, and not eat them. She enjoys hunting for prey by weaving webs across Nazarick's 3rd and 6th Floors. According to Entoma, she does not always act like a glutton. She likes to occasionally weave webs as a form of trap for prey. She does so simply for the thrill. Entoma does not like her original voice. She becomes quiet after losing her fake voice. Thus, she does not speak unless it is necessary to do so in the presence of her master. However, Entoma is the type to harbor grudges towards anyone who damages her clothing or voice, like Evileye did, wishing to exact vengeance on them if the opportunity ever presents itself. Entoma, like most of the NPCs made by the 41 Supreme Beings, takes immense pride and joy at her physical appearance, role, and job given to her by her creators. During her battle against the Blue Roses, where Gagaran and Evileye constantly insult her, Entoma in particular shows immense anger and hatred towards Evileye for mockingly asking her what kind of "sick freak" would want her to be their maid and serve them. This ends up causing her to enter into an unbalanced/uncontrollable homicidal rage for the insult not only towards her but, also her creator and the other Supreme Beings and severely damaged her sense of pride. Later, she promises Ainz that she would be the one to finish Evileye off, if ever needed. She hopes for Evileye to be the next victim she steals a voice from.