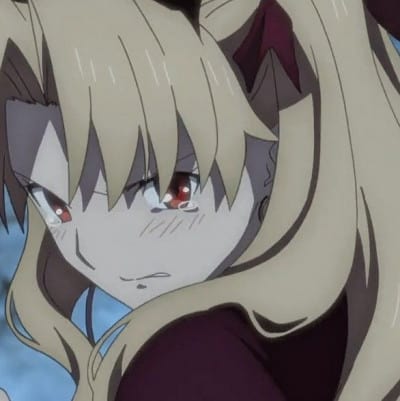 Ereshkigal is a Lancer-class Servant summoned by Ritsuka Fujimaru in the Grand Orders of Fate/Grand Order. This form is not that of the Goddess Ereshkigal, but that of a Pseudo-Servant where she has possessed the soul of a human with a similar wavelength to her's, Rin Tohsaka. Unlike Ishtar, Ereshkigal does not retain Rin's black hair. Instead, her hair is blonde, much like the Rin Tohsaka of Fate/EXTRA. Though she claims that her role is merely to supervise humans, like the underworld goddess that she is... "... It's a problem if so many people are coming to the underworld... It's also a big issue creating cages to confine all these souls... I wonder if I can provide them a more comfortable place to be in..." In this way, it's hard to fully conceal her caring heart. She is truly a red angel of the underworld. A passive and introverted nature. Because of the high wisdom and pride she boasts, she sacrifices herself to the duties of the mistress of the underworld, bound by her own design to be the goddess of death and decline. Envying the beautiful, laughing at the unsightly, and killing so that which she desired never passes to the hand of another... or so was Ereshkigal, but due to her assimilation with the young girl she inhabits, she has gained an objective awareness that such things are not good and embarrassing, her brutality disappearing to the depths. But as she is a frank person, once angered, that side will come to the surface, becoming the unfortunate goddess as terrifyingly as told in legends. The principles she act on belong to the goddess Ereshkigal, occasionally making her seem more level-headed and self-depreciating than the young girl serving as her vessel. She has the same theatrical elocution as Ishtar but occasionally breaks into the tone of an elegant lady. Like suddenly becoming honest, or emphasizing a My, oh my when panicking, those courteous gestures are her base portion coming out. While Ishtar was originally raised as a sheltered girl, the pampering and unbridled freedom afforded to her caused her to develop the speech of a woman of action. Meanwhile, as Ereshkigal diligently carried out her duties in the underworld, it is surmised that her choice of words became that of a sheltered (oblivious) young lady.